In an effort to combat extinction in salamanders, researchers test the effectiveness of translocation. Documenting population growth over a four year period, the published study in Herpetologica found this method to be successful. 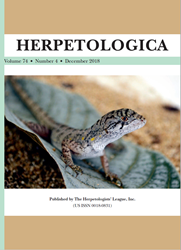 Between 2011 and 2013, a total of 41 hellbenders were followed at two sites along a 112-kilometer stretch of the Blue River in southern Indiana.

Herpetologica –With one-third of amphibian species facing extinction, the use of translocation, including population augmentation, is one of several tools available to minimize the risk of local extinctions. By intentionally moving an organism from one location to another, it is believed that the organism could thrive in a new habitat and contribute to future reproductive efforts.

In an article published in the journal Herpetologica, researchers from Purdue University utilized hellbenders, a type of large, aquatic salamander primarily found near moving bodies of water, to examine the impact of translocation and population augmentation. The researchers used radio telemetry to track the hellbenders’ movements, comparing the responses of wild-caught and captive-raised individuals as they were released into a suitable habitat.

Between 2011 and 2013, a total of 41 hellbenders were followed at two sites along a 112-kilometer stretch of the Blue River in southern Indiana. The researchers quantified site fidelity, movement distances, home range sizes and shelter preferences of all subjects. The study findings indicated that adult hellbenders had a higher site fidelity compared with the juveniles, and both adult and juvenile translocates exhibited a greater movement distance, which led to larger home range sizes. The researchers also created artificial nests to help ease the transition for translocates and noted that the adult translocates were more likely to use these nests in comparison to both adult residents and juvenile translocates.

The researchers reported a single gender-based difference in the behaviors of the hellbenders: females chose a more covered shelter than the males, which was attributed to mating patterns because males are generally more active in order to successfully find a mate. It was also shown that seasonality impacted the movements. The hellbenders were more likely to move at farther distances during the autumn than during the summer.

Translocation and population augmentation of the hellbender salamanders were successful conservation strategies during this study. This achievement was shown to be even more evident in the wild adult translocates compared with the juveniles, because successful reproduction was documented at one of the recipient sites four years after the start of the project.

Full text of the article, “Movement and Habitat Use of Eastern Hellbenders (Cryptobranchus alleganiensis alleganiensis) Following Population Augmentation,” Herpetologica, Vol. 74, No. 4, 2018, is now available at http://www.hljournals.org/doi/abs/10.1655/Herpetologica-D-17-00044.1.