Scytl is the only Spanish company in the list that includes other successful and fast growing European technology companies such as Alfresco, BlaBlaCar, Spotify, or Vente-Privee. 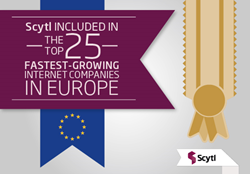 Scytl, the worldwide leader in secure online voting and election modernization, has been included in the recently published Top 25 Fastest-Growing Internet Companies in Europe. Companies are nominated by the most active investors in the technology sector selecting companies outside their own portfolio. The top 25 list was announced at the Noah Internet Conference in London, one of Europe´s preeminent events for Internet CEOs, executives and investors.

Scytl is the only Spanish company in the list that includes other successful and fast growing European technology companies such as Alfresco, BlaBlaCar, Spotify, or Vente-Privee. With a year over year growth of 70% and an expanding global footprint in more than 35 countries, Scytl´s election specific technology and security is helping drive innovation in an industry where it is long overdue.

“We are extremely proud to be recognized by the top investor community from the technology industry along with other global leaders. The growth in European technology companies being positioned and leading rankings such as these shows that European talent is not only helping drive innovation across the globe, but becoming global leaders in their respective industries,” says Pere Valles, CEO at Scytl

About Scytl
Scytl is the global leader in secure election management and electronic voting solutions. Specializing in election modernization technologies, Scytl offers the first end-to-end election management and voting platform, providing the highest security and transparency standards currently available. Scytl has capitalized on its more than 18 years of research to develop election-specific cryptographic security technology protected by more than 40 international patents and patent applications, positioning Scytl as the company with the largest patent portfolio of the industry.

Scytl’s solutions have been successfully used in over 35 countries across the globe over the last 10 years, including Canada, the United States, Mexico, Ecuador, France, Norway, Switzerland, Bosnia-Herzegovina, the UAE, India, Iceland and Australia. Scytl is headquartered in Barcelona, Spain with strategic offices the United States, Canada, Brazil, Peru and Greece as well as field offices in the UK, Ukraine, Mexico, Malaysia, India, Bangladesh and Australia. For more information, visit http://www.scytl.com