A researcher at South Dakota School of Mines & Technology is developing a biochip to detect biomarkers in urine that will indicate early osteoporosis in astronauts. 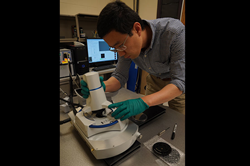 “This is potentially a game-changer in terms of our ability to monitor and prevent disease,” says Congzhou Wang, Ph.D.

Imagine using a simple, portable test to detect cancer before malignant tissues even begin to form, or to detect bone loss before it causes osteoporosis. For South Dakota School of Mines & Technology researcher Congzhou Wang, Ph.D., these ideas are becoming reality.

“This is potentially a game-changer in terms of our ability to monitor and prevent disease,” says Wang.

Wang, an assistant professor in nanoscience and nanoengineering at SD Mines, has been awarded a $52,000 seed grant from SD NASA EPSCOR to research and develop a biochip to detect biomarkers indicating early osteoporosis. A biomarker is a biological molecule found in body fluids that signals disease or conditions in the body. These biochips use gold nanoparticles as sensors.

As a researcher in nanoscience and nanoengineering, Wang’s research focuses on nanomaterials – materials of incredibly small scale. For instance, the nanoparticles in his sensors are 1 to 100 nanometers in size, more than 1,000 times smaller than a human hair.

The eventual goal of Wang’s research is to provide a testing “strip” or “biochip” that can be used by astronauts in space to catch early osteoporosis biomarkers found in urine. Bone loss occurs in humans while in space because the weightless environment relieves the bones of their job of supporting body weight. Without that job, the bones lose density. “Astronauts can suffer a huge amount of bone loss,” Wang says.

Currently, testing for bone loss in space requires a cumbersome process that involves heavy instrumentation for bone density testing. The biochip will change that, Wang says.

The biochip Wang is developing will use urine for detection. Urine is less invasive, easy to collect and has a plethora of protein biomarkers. The biomarkers will be analyzed with a small, handheld spectrometer. The chips used in the spectrometer will be low-cost (maybe as low as $5) and able to withstand environmental changes – hot and cold. They will also have a long shelf life in order to be taken into space for long periods of time. “These should be very stable,” Wang says.

In addition, the procedure will not require the skill of a trained technician, Wang says. Anyone can do the testing.

The technology also has a wider reach than only the astronaut population, Wang says. He sees it being used in underserved communities and in rural America, where access to preventative screenings are often more limited. Such simple screenings could even become part of an annual physical or used by military for soldiers deployed to remote locations.

Wang’s research into identifying biomarkers in early detection of osteoporosis is an extension of cancer research he conducted while at Washington University in Saint Louis, Mo., where his research focused on plasmonic biosensors for protein sensing and metal-organic frameworks for protein stabilization.

For now, however, Wang and his USD collaborator and team of SD Mines graduate students will focus the research on osteoporosis. But Wang foresees a time when people could use bio sensors to monitor biomarkers in their own homes, for everything from osteoporosis to cancer.

“The long-term benefits of this research are yet to be seen, but it’s very exciting,” he says.