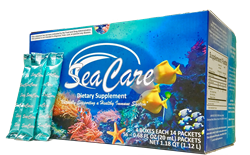 Unless the supplement says it contains extracts, the manufacturer is simply dehydrating a sea cucumber and putting it in a pill.

Sea Cucumbers have been used for centuries as a traditional Chinese medicine to treat fatigue, impotence, constipation, frequent urination and joint pain, but have recently been making headlines for clinical findings showing enzymes extracted from sea cucumbers possess the ability to boost the immune system, naturally.

Sea Cucumbers are considered a delicacy in many Asian cultures, and although they sound like a vegetable they are marine animals resembling large worms. Sea Cucumbers can be found in waters throughout the world, however the most valuable and sought-after species come from the tropical waters near the Great Barrier Reef. With over 1250 species, research conducted shows only a handful of species are known to have the active ingredient to boost the immune system – Frondoside A.

Frondoside A is a triterpenoid glycoside from the Sea Cucumber which exhibits a range of very potent immunomodulatory effects, making it a natural immune booster for anyone with a compromised immune system.

When looking for a reputable source for Sea Cucumber, there are several things to consider:

First, the process in which the Frondoside A is collected is extremely important, as many sea cucumbers are highly toxic. SeaCare, Inc., which has been extracting the enzyme for decades to produce the supplement understands the dangers and importance of properly handling the animals to ensure that only the most pure and potent extracts are used.

Secondly, many Sea Cucumber supplements tout their “100% Sea Cucumber” claims, but unless the supplement says it contains extracts, the manufacturer is simply dehydrating a sea cucumber and putting it in a pill. That pill contains the body of the sea cucumber – which isn’t actually the active ingredient that will boost the immune system. Dehydrating the animal strips it of its inherent nutritional value, so you’re left with a pill that contains a miniscule amount of Frondoside A and the other enzymes that hold any benefit.

The source of the Sea Cucumber is also extremely important. As noted before, the most highly regarded Sea Cucumbers to boost the immune system are harvested in the warm waters near the Great Barrier Reef. SeaCare harvests all of its ingredients – Sea Cucumber, Sea Urchin and Marine Grass - in these waters off the island of Vanuatu. Vanuatu is located just west of Fiji in a tropical climate where the marine life thrives. Vanuatu is widely regarded as the best source for Sea Cucumbers and has rigorous sustainability regulations that protect and preserve all the marine life to prevent overharvesting of the natural resources.

With new research being published frequently, researchers are more aware than ever before of the ability for the active enzymes of the sea cucumber to boost the immune system and benefit an individual’s overall well-being. More research is being conducted to prove its anti-tumor and ability to cause apoptosis, which will shift the pharmaceutical industry to open up to these natural immune boosters. Apoptosis – programmed cell death – is the ultimate goal in fighting diseases. When bad cells are programed to “commit suicide” all while naturally boosting the immune system, a balance in the body will occur unlike any other lab created drug could ever cause.

More research is required, but research thus far has blown the doors wide open to a breakthrough on this natural immune booster and the possibility of amazing future medical innovations.

SeaCare, Inc. is proudly the official supplier of SeaCare for the United States, Canada, Central and South America. SeaCare is a natural immune booster made from a blend of extracts from Sea Cucumber, Sea Urchin and Marine Grasses that improves one’s quality of life through an enhanced immune system and increased energy.

If you would like more information about this topic, please call Katie at 800-875-5598, visit http://www.SeaCareInc.com or email katie@seacareinc.com.