Seasoned Hollywood movie producer Thomas Douglas Adelman releases ‘Once Upon A Time in Yorkville: From New York City To Hollywood - A Memoir’

Join the author as he looks back at his childhood, adult life, and his rise to the top of the entertainment industry 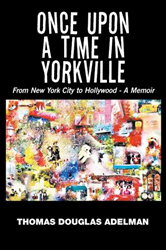 Thomas Douglas Adelman looks back at an eventful life that includes working with celebrities such as Keith Richards, Chuck Berry, and Julie Andrews in his engaging new book “Once Upon a Time in Yorkville: From New York City to Hollywood - A Memoir” (published by iUniverse).

Born in 1954, and having grown up on New York City’s Upper East Side in an upper-middle-class dysfunctional yet loving Jewish family, that oddly celebrated Christmas, Adelman was inspired by his mother, an actress in the forties, and despite being a troubled child who got kicked out of private schools, ended up rising to the top in the entertainment industry. In his memoir, which includes a Foreword by Academy Award and Grammy award-winning director Taylor Hackford, Adelman, a screenwriter, producer, and director, colorfully describes his adventures from childhood, through traveling the world in his youth and for work, to being named the Vice President of Beatle George Harrison’s production company Handmade Films, to ultimately launching his own successful company. Join the author on his fun and exciting life journey in “Once Upon a Time in Yorkville: From New York City to Hollywood - A Memoir.”

What readers are saying:
“Great insights and truth from Hollywood. Fantastic read and insights into the genuine inner workings, personalities, and challenges of producing high quality entertainment in "the business". Tom Adelman invites the reader into a world so personal and detailed that his authenticity is what shines most clearly through the journey. A must read!” — K & K

“A touching and fun ride through the exceptional life of an important and lovable Hollywood producer. Thomas Douglas Adelman guides us through his personal life journey via a warm, humorous, and intimate lens, where his memories become ours as we take his wonderful and colorful journey down memory lane with him. Along the way, we fall in love with the scenery in Thomas’ world and those who are so very special to him. Well done and highly enjoyable.” — C.M.

Visit https://www.iuniverse.com/en/bookstore/bookdetails/827982-once-upon-a-time-in-yorkville get a copy.

About the Author
Thomas Douglas Adelman was formerly a senior producer and director for New York’s Group W Cable. During his tenure at GWC, he won ten ACE Awards and numerous medals at international film festivals. He was also nominated for an Emmy Award for directing a classical music performance series in collaboration with the Juilliard School. He has also written and just published his original screenplay “Georgia & Nathan a Love Story” about a Southern belle and a Jewish boy who become unlikely friends at university through their shared love of singing. As their friendship deepens, problems arise when it is discovered Georgia’s family may have collaborated with the Nazis during World War II.