Journey back to the Regency Period with characters that defy convention in "The American Duke: Crossed Lines...Twisted Fate." 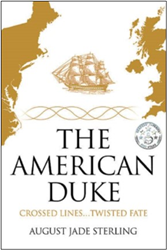 “This ground-breaking story about the aristocracy is not only a fascinating read, but it considers an entirely different look at race relations. We are thrilled to announce the release of the first book of this new series.” - Robert Fletcher, CEO of Strategic Book Publishing and Rights Agency

“Two Hundred and Forty Miles off the Coast of America, Captain’s Cabin, 1791: The captain of the British ship Standish pronounced them man and wife. Avery looked into the deep-brown eyes of the honey-haired beauty standing before him, his wife. The kiss was a promise of their future, and Anne felt it to the tip of her soul.”

Thus, begins the marriage of Lord Avery David Roxbury, brother of Sterling Adam Roxbury, the Duke of Westmoure. The duke learns a great many lessons about forgiveness before he passes away at the ripe old age of 70, leaving a title which will eventually go to an American heir apparent. The brothers realize the slave trade is embedded in American life, and that their family is secretly driven by it to correct wrongs. Interracial marriages were forbidden in America and Canada, and one could not inherit a British title unless one was born of a legal marriage.

Many believe that slaves only came to America from Africa. However, Irish women were also sold as slaves, and were usually less expensive than African women. These Irish slaves were bought expressly to cohabit with African men to produce babies that would increase the slave owners’ property value, and some of their children would try to pass as white.

When the Crown’s top operatives travel to America to escort the new Duke of Westmoure to England, they encounter murder, hatred, illegal marriages, a life-changing time-honored principle, and an eavesdropping right-hand man. Many want the American Roxburys dead and will go to any length to make that happen. Will the American heir live long enough to assume the dukedom?

About the Author: August Jade Sterling lives in Minnesota with her cat Sir Prince Charming. She holds a graduate degree from the Maxwell School at Syracuse University. When not vacationing with her sister, she sings jazz. This is her first book in the American Duke series. “After reading and falling in love with the characters of many historical romance novels, I continuously felt something wasn’t right. Why were all of the heroes and ladies white or blonde-haired with blue eyes? Simply put, there was a void and inaccurate betrayal of characters in historical romance novels. The world is a place where culture and races blend, and books pave the way.”

“This ground-breaking story about the aristocracy is not only a fascinating read, but it considers an entirely different look at race relations. We are thrilled to announce the release of the first book of this new series,” said Robert Fletcher, CEO of Strategic Book Publishing and Rights Agency.

THE AMERICAN DUKE: CROSSED LINES, TWISTED FATE (ISBN: 978-1-948858-28-1) is now available for $16.50 and can be ordered through the publisher’s website:
http://www.sbprabooks.com/AugustJadeSterling or at your favorite book seller.