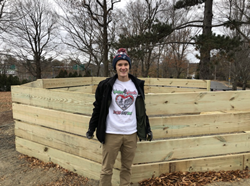 Benjamin Duby in front of his completed Gaga Ball Pit.

Building these pits will provide kids with a safe game to play at recess and a way to stay active.

Security Engineered Machinery Co., Inc. (SEM), global leader in high security information end-of-life solutions, donated monetary funds to the Eagle Scout project of Benjamin Timothy Duby of Worcester, MA. The project, which began in late 2019, was to construct a Gaga Ball Pit for the students of Wawecus Road School in Worcester, MA to be able to use during recess. Duby recruited family members and friends to aid in the construction after securing the funding from SEM and additional partners.

Benjamin worked as an intern for SEM in the past in both the manufacturing and shipping departments between his own school semesters. In his initial proposal for the project and funding, Duby stated: “Being a small elementary school, there is little budget for a playground and I noticed that another school one mile away had a playground that was much larger and more extensive. Building these pits will provide kids with a safe game to play at recess and a way to stay active.”

The pit, known as a Gaga Ball Pit, is a last person standing arena game where players of all ages bounce a ball towards each other in an attempt to make contact with a player below their legs. If a player is hit by the ball, they are out of the game, and this continues until there is a single player remaining.

“We’ve seen the work ethic and values that Benjamin holds when he has assisted us through his internship,” said Andrew Kelleher, President and CEO of SEM. “Therefore, when he asked if we were willing to help him and the children of Wawecus Road School, it was a very easy decision to make.”

Throughout the 52 years they have been in business, SEM has consistently given back to the community they’ve called home for the last half a century. In the last few months alone, SEM has donated hundreds of pounds of food to the Worcester County Food Bank, provided over 80 toys for less fortunate children from Westborough, MA over the holidays, and built a log cabin playhouse for a local veteran family.

Mr. Duby completed his Eagle Scout project on December 13 and passed the Eagle Scout board of review on January 28th, which is no small feat for a scout to achieve.