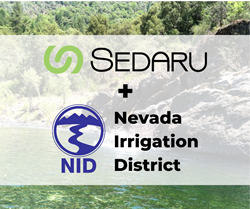 Sedaru is proud to partner with Nevada Irrigation District.

“I am confident that the new Sedaru asset management system will improve our efficiencies and allow us to work across departments and business lines using the same software,” stated Remleh Scherzinger, General Manager, Nevada Irrigation District.

The District was seeking to replace its current system, while extending an asset management framework to previously unsupported facilities. The Hydroelectric Department led a steering team consisting of Department Managers, IT, and consultants to identify and evaluate 10 different solutions prior to making a selection. Categories of criteria used in the evaluation included functional capability, industry fit, viability, and network presence, with goals including documentation and standardization of work processes, developing and centralizing an asset repository, and unifying work-related data within a common platform for its unique inventory of watershed, hydropower, fleet, raw water, and treated water infrastructure assets.

“I am confident that the new Sedaru asset management system will improve our efficiencies and allow us to work across departments and business lines using the same software,” stated Remleh Scherzinger, General Manager, Nevada Irrigation District.

Sedaru will support workshops to review and develop use cases, workflows, and data structures for both horizontal and vertical assets for each District department. Sedaru will integrate with the District’s Esri-based GIS Server to deliver real-time maps, as well as Tyler Munis Enterprise Resource Planning (ERP) software for real-time inventory management and costing analytics. Sedaru will serve as the work order system of record, capturing inventory data from the District’s ERP, and delivering location data from its GIS, to support office and field staff with work plans, work tasks, work orders, service requests, and related, including labor, equipment, and materials.

“We appreciate the District’s extensive selection process and are thankful for the outcome and opportunity to support NID’s progressive asset management initiatives. We’re excited to partner with NID’s team of experts to deliver a unified system for day-to-day work, to facilitate efficient business operations and asset planning for District employees and the customers they serve," said Paul Hauffen, President & CEO, Sedaru, Inc.

About NID: NID is a diversified water resource district that supplies both treated drinking water and irrigation water to nearly 27,000 homes, farms and businesses in Nevada and Placer Counties in the foothills of Northern California’s Sierra Nevada Mountains.

About Sedaru: Sedaru operates the world’s leading utility management software as the singular, exclusive interface for utilities to access information, automation, and control of the business and assets they run. We do this by creating, automating, and consolidating the digital utility, one workflow, one sensor, one system at a time to bring together the organization’s data, systems, and the people they serve with Sedaru software and services. Request a demo to see how Sedaru can work for your utility: https://sedaru.com/demo/