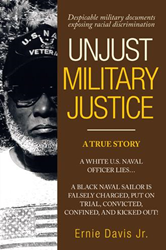 Racism is destructive, but God vindicates the innocent.

Davis shares how a white naval officer lied, had Davis falsely charged, put on trial, convicted, confined and kicked out of the Navy with a bad discharge. Even though the primary wrongdoer swore under oath at the author’s military trial that he had committed no acts of racial bias, documents that the same officer prepared disprove that.

The author’s military records shine a bright spotlight on a plot conceived and successfully initiated by a white naval officer who lied incessantly about Davis’ conduct and military background, falsified personnel records, and triggered a military trial resulting in the author’s “undesirable” discharge from the military. The author shows how everything that happened to him while in the Navy was based on monumental lies by one individual as well as a failure in the Navy system of justice.

“Racism is destructive, but God vindicates the innocent,” Davis says. “Shun evil, do good, and God will bless you.”

“Unjust Military Justice” is available for purchase online at the Archway link above, from Barnes & Noble and on Amazon at: https://www.amazon.com/Unjust-Military-Justice-Despicable-Discrimination/dp/1665709790.

About the Author
Ernie Davis Jr. grew up as one of seven children of an impoverished, black Louisiana family. He joined the military to help his family and escape poverty. He was trying to do what Tyler Perry communicated to Anderson Cooper when he said his mother admonished him to “find a way.” The author’s understanding of what Perry’s mother meant was to find a way to succeed in spite of all of the obstacles he would face along the way as a black man.