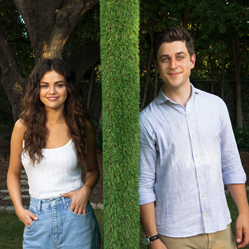 I’m so excited to reunite with my friend David on our feel-good, coming-of-age film, This Is The Year. With all the craziness going on in the world, a feel-good movie is just what we need right now!

BOLD Entertainment and Novo Media Group, LLC, are pleased to announce the first-ever, interactive, virtual movie premiere on August 28th for their first film, This Is The Year. The film is directed by David Henrie, with his longtime friend Selena Gomez signing on as Executive Producer. The one-night-only event brings the two former co-stars of Wizards of Waverly Place back together and adds many more next-generation stars in the cast and throughout the live event.

This Is The Year is a contemporary spin on many of the classic 80’s movies that resonated with that era’s youth. It aims to address the issues facing teens today – high school friendships, romances, escapades, change and more – speaking their language and breaking through with a story that actually means something.

“I’m so excited to reunite with my friend David on our feel-good, coming-of-age film, This Is The Year,” said Selena. “With all the craziness going on in the world, a feel-good movie is just what we need right now!”

“It is so great to be working again with Selena, especially on a project that has so much magic to it,” stated Henrie. “We actually had planned a theatrical release of This Is The Year, but due to the pandemic we had to pivot swiftly. Thanks to our partners at BOLD Entertainment, we were able to create a brand-new movie experience at home that is more than just a release to Video on Demand.”

“This has been a year of unprecedented change, struggle and uncertainty for all of us,” Henrie continued. “As we turn our focus toward new beginnings – a new school year, a new season, a new ‘normal’ – there’s never been a better time to embark on a journey filled with friendship, love, empowerment and music.”

In the film, in a last ditch effort to win over the girl of his dreams, a nerdy high school senior (Lorenzo Henrie – Fear the Walking Dead, Agents of S.H.I.E.L.D.) and his best friends embark on a road trip to see their favorite band – lovelytheband – at the hottest music festival of the year, Front and Center, only to discover true love in the most unexpected place. Joining Lorenzo and David are Gregg Sulkin and Jeff Garlin, also alumni of Wizards of Waverly Place, and other cast members Vanessa Marano, Jake Short, Alyssa Jirrels and Bug Hall.

BOLD Entertainment’s This Is The Year virtual premiere takes place on Friday, August 28th, at 4:30pm PT / 7:30pm ET and is open to the public. With the purchase of a digital ticket, fans can join the pre-show featuring music from the film’s soundtrack, behind the scenes clips, an introduction from David Henrie and Selena Gomez, and more. Then after the feature film is played, TikTok personalities Charli and Dixie D’Amelio will lead a live Q&A of the cast. And finally, the evening tops off with an exclusive performance by platinum-selling, alt-pop trio lovelytheband featuring music from their newly released album.

A portion of the evening event’s proceeds will be donated to Selena’s chosen charity, the PLUS1 COVID-19 Relief Fund with funds allocated to its World Central Kitchen non-profit and the Sweet Relief Musicians Fund, as well as other charity and non-profit organizations that wish to use ticket sales for fundraising.

“Our virtual premiere on the 28th is going to be a blast and benefit some great causes. This wouldn’t be possible without BOLD Entertainment’s amazing support, resources, and expertise to develop and pull this all together,” added Henrie. “Big thanks to my team at Untitled Entertainment led by Jason Weinberg, and the A3 Artists Agency, who have been incredibly helpful, too, throughout the process bringing some great partners into the fold.”

For more information on This Is The Year and to purchase tickets for the virtual premiere, please visit http://www.thisistheyear.film and follow along on Instagram, Facebook, and TikTok at @thisistheyearfilm.

About BOLD Entertainment:
BOLD Entertainment is a division of BOLD Capital Group, LLC, a premier business consultancy, that works with leaders in the entertainment industry to develop and implement innovative, comprehensive, and successful strategies to overcome business obstacles. BOLD’s team of experts have proven success in marketing and communications, technology, finance, event planning, public relations, and more. For more information, please visit http://www.boldcapitalgroup.com.