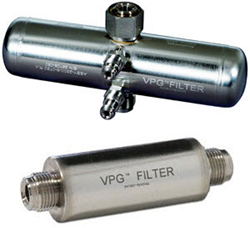 The Model 2920 VPG Filter™ is an ultra- high efficiency filter designed for Vapor and Process Gas filtration. The VPG Filter has an estimated particle penetration of less than one part per trillion and a filter efficiency of 99.9999999999% (twelve 9s) at 2.5 nm. This 2.5nm, part-per-trillion particle penetration, twelve-9 efficiency rated filter is the highest rated filter in the filtration industry for semiconductor applications.

Conventional high-purity, point-of-use gas filters are used in a compressed gas line for particle removal. In contrast, the VPG™ filter is generally used downstream of a vaporizer under vacuum flow conditions to remove particles from a gas/vapor mixture with the carrier gas—such as nitrogen, argon or helium—being mixed with a chemical precursor vapor containing hafnium, zirconium, or other elemental species of interest for atomic layer deposition (ALD) as well as chemical vapor deposition (CVD) applications.

For vapor/ process gas mixture filtration, the filter may be exposed to operating pressures as low as 10 Torr, temperatures as high as 300C, and chemically reactive vapor in the mixture. Direct filter efficiency measurement is generally impossible. Experimental measurement with mathematical extension provides an alternative.
MSP has developed a predictive model to extend the test result obtained by a condensation particle counter under normal room temperature and pressure conditions into the vacuum flow conditions of the VPG filter in a semiconductor thin film deposition tool.

MSP research shows that the VPG-A3 filter is an ultra-high efficiency filter capable of removing almost all particles from a gas/vapor mixture stream from 2.5nm to 100nm. In filtration, the term “absolute filter” is generally used for filters with a particle penetration that is too low to detect. The VPG-A3 filter is therefore an Absolute Nano-Particle Filter™, capable of removing substantially all nano-particles from 2.5 nm to 100 nm to a very low and essentially non-detectable level. This 2.5nm, part-per-trillion penetration, twelve 9 efficiency filter is the highest rated filter for [vapor/process gas filtration in the semiconductor industry.

PRESSURE DROP, OPERATING LIFE, AND FILM THICKNESS UNIFORMITY
The particle removal efficiency is but one of several filter characteristics for vapor/process gas filtration. Other important characteristics include the filter pressure drop, the filter life, and the physical design of the filter that can influence the film thickness and its uniformity. All these factors are taken into consideration in the design of the VPG family of filters from MSP to insure reliable operation and long service life under the most demanding process environment in semiconductor film deposition processes.

For over 30 years MSP has created [micro- and nano-particle instrument and equipment technologies for scientific research and industrial applications. MSP is known world-wide for particle technology expertise in helping researchers and manufacturers solve tough problems with creative equipment designs. Contact MSP at sales(at)mspcorp(dot)com to discuss micro- and nano-particle application or research needs.