‘The Failure of Representative Government and the Solution’ provides a constitutional pathway to enacting direct democracy and securing lawmaking power to voting citizens, reducing politicians’ monopoly on the legislative process 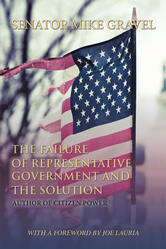 There’s only two venues for change. One is the government, and they don’t want to do it, and the other is the people, and the people don’t have the tools to do it…I outline in this book the detailed tools…it’s a manual to create and operate a Legislature of the People.

The 2020 presidential primary elections and COVID-19 pandemic have brought to the forefront a multitude of issues with the U.S. political infrastructure. An increasing number of Americans have shown support for implementing single-payer healthcare, making higher education affordable and accessible, limiting the power of private banks and limiting defense spending, yet, the interests of the American public are not reflected at the legislative level of representative government.

However, rather than becoming apathetic about the political process, former Alaskan senator and 2008 and 2020 presidential candidate Mike Gravel urges citizens to instead consider that the answer to today’s crises lies with the people and not political leaders. In his new book, “The Failure of Representative Government and the Solution,” he outlines how the American people can create and operate a Legislature of the People, thereby breaking the monopoly representatives have on lawmaking and shifting from minority rule by the elite to majority rule by the people.

When Gravel left the Senate in 1981, he was outraged by the tremendous influence money had in determining laws and the priority given to defense spending over the welfare of citizens. After spending years reflecting on how government could better serve its people, he set out to find a constitutional strategy that would allow for citizens to bypass corrupt legislators and enact policy themselves.

“There’s only two venues for change,” said Gravel in an interview with Primo Nutmeg podcast. “One is the government, and they don’t want to do it, and the other is the people, and the people don’t have the tools to do it…I outline in this book the detailed tools…it’s a manual to create and operate a Legislature of the People.”

In his book, Gravel explains that while the constitutional framers purposely left out lawmaking tools for the people in order to protect the institution of slavery, the Constitution’s preamble acknowledges citizens’ sovereign legislative power. He constructs a constitutionally backed, lawyer-reviewed argument for direct democracy, providing step-by-step instructions to inform average citizens on how to secure and exercise their power as well as a legislative package to enact a Legislature of the People.

With the creation of a Legislature of the People, elected officials would still retain lawmaking power. However, the American people would no longer have to rely solely on their discretion to enact much-needed legislation. Rather, they would be able to create, vote on and enact laws independent of representative government.

Ultimately, through “The Failure of Representative Government and the Solution,” Gravel seeks to show the American people that political change is possible and empowers them to become deliberate lawmakers and exercise control over the future of the country.

“The Failure of Representative Government and the Solution: A Legislature of the People”
By Senator Mike Gravel, Joel Lauria (foreword)
ISBN: 9781728339290 (softcover); 9781728339306 (electronic)
Available from Amazon, Barnes & Noble, AuthorHouse and MikeGravel.com

About the author
A 2008 and 2020 Democratic presidential candidate, Senator Mike Gravel started his political career representing Alaska in the U.S. Senate from 1969 to 1981. During those 12 years, he scored many notable achievements, beginning in his freshman term when, in 1971, he waged a successful one-man filibuster for five months that forced the Nixon Administration to cut a deal ending the draft. Gravel is most prominently known for his release of The Pentagon Papers, the 7,000-page secret official document that revealed the lies and manipulation that misled the country into the Vietnam War. The release of The Pentagon Papers and the ensuing lawsuits precipitated the end of the U.S.’s involvement. After serving in the Senate, Senator Gravel founded the Democracy Foundation, Philadelphia II, and Direct Democracy, three non-profit corporations dedicated to the establishment of a Legislature of the People in the United States. He has also authored and co-authored several books, including “A Political Odyssey” (2008), “Citizen Power” (2008) and “The Failure of Representative Democracy and the Solution” (2019). Now at 90, Gravel carries on his life’s work in the fight for global peace, progressive economics and direct democracy.