The Amsterdam office of global law firm Greenberg Traurig, LLP continues its strategic growth with the addition of Sabine Schoute, Lilian Welling-Steffens, and Linda Thonen, all senior-level women practitioners, to the firm’s Global Banking and Financial Services Practice. Schoute joins as a Shareholder; Welling-Steffens joins as Of Counsel; and Thonen joins as a Local Partner. Recently, the office added leading M&A and Private Equity Dutch lawyers Bas Vletter and Herald Jongen as in its Global Corporate Practice, as well as Thomas Timmermans in its Labor & Employment Practice. 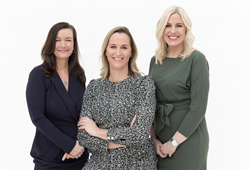 The Amsterdam office of global law firm Greenberg Traurig, LLP continues its strategic growth with the addition of Sabine Schoute, Lilian Welling-Steffens, and Linda Thonen, all senior-level women practitioners, to the firm’s Global Banking and Financial Services Practice. Schoute joins as a Shareholder; Welling-Steffens joins as Of Counsel; and Thonen joins as a Local Partner. Recently, the office added leading M&A and Private Equity Dutch lawyers Bas Vletter and Herald Jongen as in its Global Corporate Practice, as well as Thomas Timmermans in its Labor & Employment Practice.

“Having Sabine, Lilian, and Linda join us further illustrates our commitment to strategically grow our office in the firm’s core practices, the Banking and Financial Services Group, and the firm’s award-winning Global Corporate Practice. With this all women Corporate, Banking, and Finance team, Greenberg Traurig Amsterdam not only distinguishes itself from its peers, it becomes a lightning rod in an industry that is still largely male dominated and it underpins the value Greenberg Traurig attaches to diversity,” Thomas van der Vliet and Cees van Oevelen, Co-Managing Shareholders of the Amsterdam office, said in a joint statement.

“This team is an important addition to the firm and our global finance team, known for its extensive experience representing domestic and international banks, finance companies, hedge funds, private equity sponsors, and corporate borrowers in a full range of financing transactions across borders and in diverse types of economies and reflects the firm’s commitment to growing M&A, Private Equity and related Finance, Restructuring, Tax and other needs in Europe and globally. Firmwide, Greenberg Traurig’s Corporate Practice, including Banking, Finance, M&A, and Private Equity attorneys, has added more than 330 attorneys since 2015. Greenberg Traurig is one, unified, global firm of approximately 2,200 lawyers in 41 offices around the world, including five in Europe with approximately 350 attorneys there. In addition to those noted above, recent additions specifically in the Corporate Practice have included M. Adel Aslani-Far in New York from Latham & Watkins, Eiji Kobayashi in Tokyo from Paul Hastings; and the Studio Santa Maria firm joining us in Milan.This is all about responding to client needs with strong and experienced teams that can really add value,” said Richard A. Rosenbaum, Greenberg Traurig Executive Chairman.

Schoute advises financial institutions and businesses in a broad range of national and international financing transactions. From 2015 to 2017, Schoute worked in the New York office of Loyens & Loeff. In 2015, she was recognized by Alex van Groningen as a “Best Young Talent M&A” in the Netherlands. In 2014, she was a secondee at Deutsche Bank Nederland N.V. in the Leveraged Finance Team. Schoute received a post-graduate degree in Financing and Securities from Grotius Academy. She holds an LL.M. in Corporation Law from New York University where she was a Fulbright Scholar, and an LL.M., cum laude, from the University of Amsterdam, from which she also received an LL.B. She is a former board member of the New Amsterdam City Swim Foundation; and a former secretary of the Amsterdam Young Bar Association. Schoute was named a Next Generation Lawyer several times by Legal 500 in Banking & Finance in the Netherlands.

Welling-Steffens focuses her practice on structured and secured financing, restructuring, and insolvency. She also has deep experience with private international law. Welling-Steffens completed a post-graduate course, cum laude, in Insolvency Law at Grotius/INSOLAD. She has a Ph.D. in Private International Law from Leiden University, and received an LL.M. in Dutch Law and Public International Law from the University of Amsterdam. She regularly publishes articles on various topics and annotates case law for JOR and Ondernemingsrecht and is an annotator for "Ins Updates Insolventierecht" of Bju. Further she has profound teaching experience, including serving as an affiliated lecturer at the Department of Private International Law of the University of Leiden, where she supervises bachelor and master theses; a guest lecturer, affiliated lecturer, and associate professor at the University of Amsterdam; and at the Catholic University of Malawi and the University of Malawi Chancellor College she is an associate professor and a director of the Law Department. Welling-Steffens is a legal advisor to the Mlambe Foundation and a member of INSOLAD and NACIIL.

Thonen supports the growth of the quickly expanding corporate group in Greenberg Traurig’s Amsterdam office and focuses her practice on corporate law, corporate governance, and related notarial law. She handles matters related to international acquisition structures, joint ventures, mergers, acquisitions, demergers, international tax-driven structures, reorganizations, restructurings, and secured lending and refinancing. Thonen also advises companies on their corporate structure, housekeeping, and duties and obligations regarding governance. She has completed the post-graduate course in Corporate Law at the Grotius Academy at the University of Nijmegen and holds an LL.M. in Notarial Law from the University of Amsterdam. Thonen has post-graduate professional training as a Civil Law Notary from the Royal Dutch Association of Civil Law Notaries, of which she is a member. Thonen also previously worked from the Loyens & Loeff New York office, from 2013 to early 2016.

About Greenberg Traurig, LLP: Greenberg Traurig, LLP (GT) has approximately 2200 attorneys in 41 locations in the United States, Latin America, Europe, Asia, and the Middle East. GT has been recognized for its philanthropic giving, diversity, and innovation, and is consistently among the largest firms in the U.S. on the Law360 400 and among the Top 20 on the Am Law Global 100. Web: http://www.gtlaw.com Twitter: @GT_Law.