Seniors Need A Boost in Social Security Due to Covid 19, According to a Survey by The Senior Citizens League

The expenditures of older Americans far outstripped the modest 1.3 percent cost of living adjustment (COLA) boost that Social Security recipients start receiving this month. The far greater worry, however, is a sharp increase in almost every source of quality protein — including meat, poultry, and even canned tuna. 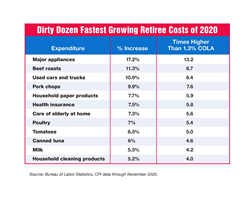 “This list is a snapshot of how COVID-19 affected prices of certain items by the end of November 2020,” says Mary Johnson, a Social Security policy analyst for The Senior Citizens League.

An eye - popping new list compiled by The Senior Citizens League (TSCL) indicates that, by late 2020, price increases for many of the expenditures of older Americans far outstripped the modest 1.3 percent cost of living adjustment (COLA) boost that Social Security recipients start receiving this month. “This list is a snapshot of how COVID-19 affected prices of certain items through the end of November 2020,” says Mary Johnson, a Social Security policy analyst for The Senior Citizens League. “There are surprising price aberrations that we haven’t seen before,” Johnson says. “Never in my wildest dreams would I have thought that toilet paper and disinfecting wipes could wind up on our annual list of fastest growing retiree costs,” Johnson says.

The far greater worry, however, is a sharp increase in almost every source of quality protein — including meat, poultry, and even canned tuna. “With many meat price increases in the double digits, we are highly concerned that older households may not be getting adequate supplies of protein in their diets,” Johnson says. “This was a nationwide problem prior to the pandemic, and the problem has been exacerbated by shortages and disruptions during the pandemic,” she points out.

While appliances and used vehicles are generally only purchased occasionally, 2020 was not a good time to be shopping for a new washing machine or used car. Appliances increased by an astonishing 17.2 percent and used vehicles rose by 10.9 percent. Johnson points out that, this time a year ago, the price increases of used vehicle prices were negative, at minus 12 percent. However, manufacturers of appliances as well as new cars and trucks shut down production lines at the start of the pandemic. While plants have slowly re-opened, supply chain disruptions and social distancing requirements have slowed production recovery. That’s led to long waiting lists for appliances, and the demand for used vehicles shot up.

Even more surprising is what isn’t showing up on the list — medical costs. The cost of medical care services still increased 2.5 times faster than the COLA, rising by 3.2 percent. That’s nothing new. In many years medical costs have increased more rapidly than in 2020. Emergency coronavirus legislation last spring restricted what providers could charge for many COVID-19 related services, and large numbers of patients and their doctors postponed non-urgent care.

When food and other important costs rise faster than the Social Security COLA, that means that retirees aren’t able to purchase as much with their benefits. This can lead to older consumers going without essentials. Research by Johnson has found that Social Security benefits have lost 30% of buying power since 2000. “We encourage everyone to consider who you may know that might need help with food costs,” Johnson says “Perhaps you can drop off a few groceries (including protein sources such as meat, chicken, eggs, milk or canned beans), or share your next batch of home - made soups, chili, or stews with others you know,” Johnson adds. “Mercifully, this list of prices will likely change in time, especially as we get COVID-19 under control and people return to work,” Johnson says.

In the meantime, The Senior Citizens League supports legislation that would boost Social Security benefits and tie the annual COLA to an index that better reflects the expenditures of retirees, such as the Consumer Price Index for the Elderly. To learn more visit http://www.SeniorsLeague.org.