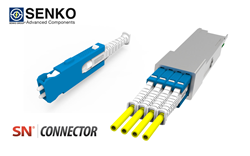 SENKO Advanced Components, Inc. (SENKO) announced today there have been major advancements in the adoption and continued deployment of its SN® Connector technology and supporting ecosystem after two years of field trials. Currently, SENKO has licensed its technology out to leading transceiver and connector manufacturers, including Applied Optoelectronics Inc., Cisco, Delta, Eoptolink, Innolight, Juniper Networks, Molex, and Sicoya. Support equipment and products, such as production and field equipment, testers, and cleaning & inspection tools are now fully supported as SENKO has been working with the various suppliers to ensure the continued adoption of the SN® form factor.

The SN® connector is a new, duplex optical fiber connector using LC style 1.25mm O.D. Zirconia ferrules, designed for the next generation Hyperscale Data Center Interconnect (DCI). This connector was designed to provide individual and independent duplex fiber breakout at a quad style transceiver (QSFP, QSFP-DD & OSFP) that is not only more efficient, reliable and scalable than the MPO connector but also at a lower in cost to implement. The SFP-DD has also adopted the SN® as their independent duo style interface, mainly for the wireless fronthaul applications.

One of the major topologies in Hyperscale DCI is the Leaf-Spine, which is required to create a cross-connection between leaf and spine switches. The structure of the Leaf-Spine data center network is typically made by the use of the MPO and LC breakout cables, or fiber shuffle boxes between switches. The SN® connector can simplify and reduce the overall cost of this structure, as SN® based transceivers are already divided into four (4) individual SN® connectors at the transceiver interface. Only SN® to SN® jumpers are required to make a mesh fabric cross-connection, connecting from point to point at the transceiver. Compared to an LC connector, the SN® can reach ultra high density at patch panel applications. While LC solutions get up to 144F within a 1RU patch panel, SN can increase the fiber counts to 432F in a 1RU panel. In a single 45 RU rack, one is able to terminate in excess of 14,000 fiber cores.

Jim Hasegawa, Executive Vice President of SENKO says, “SENKO is pleased to license SN technologies out to all these companies. With the support from them and other suppliers working on SN connectors, we foresee SN to be adopted in numerous applications, including DCI and Wireless fronthaul connectivity, especially with the standardization effort of the SN at the IEC. We express our deepest appreciation and gratitude to all our partners for their expert support and also their trust in the SN technology”.

About SENKO
SENKO Advanced Components (SENKO) is a wholly-owned subsidiary of the Senko Sangyo, which is headquartered in Yokkaichi, Japan. With 16 locations globally, SENKO provides local support to customers all around the world. SENKO was incorporated in the United States in the early nineties and has since been recognized as one of the industry’s leaders in passive fiber optics interconnect and optical components. This is due in great part to full vertical integration from the design capabilities, qualification/testing, and manufacturing. SENKO has deployed over 600 million connectors. To date, SENKO has over 100 awarded patents, with more than 140 pending.

More information about SENKO can be found at http://www.senko.com.