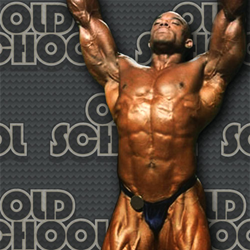 As the son of one of the most admired bodybuilders of the ‘Golden Era’ – the legendary period in the 1960s and 1970s that is the inspiration for our brand – Sergio is a born OSL ambassador.

Old School Labs™, makers of the best-selling Vintage line of natural sports supplements, has signed IFBB bodybuilder Sergio Oliva Jr. as a new Brand Ambassador. The son of the legendary Sergio “The Myth” Oliva – one of the greatest athletes in the history of bodybuilding – Oliva Jr. burst into the upper echelons of the sport with his win in May at the New York Pro, upsetting all the pre-show favorites and sending shockwaves through the bodybuilding world.

“As the son of one of the most admired bodybuilders of the ‘Golden Era’ – the legendary period in the 1960s and 1970s that is the inspiration for our brand – Sergio is a born OSL ambassador,” says Old School Labs founder and CEO Tarek Sidani. “But he’s also someone who made it on his own. Nothing gets handed to you in the sport of competitive bodybuilding, and Sergio has shown the grit and desire to achieve his own kind of greatness.”

In fact, Oliva Sr. – the only man to beat Arnold Schwarzenegger at the Mr. Olympia – didn’t want his son to get involved in the world of bodybuilding. “Not only did he not push me to compete, he didn’t even really want me working out,” says Oliva Jr. “I think he was just worried that it wasn’t a reliable way to make a living. But I was pretty set that this was what I wanted to do with my life, so I did it anyway. If anything, my legacy makes me work harder in order to make my own mark on the sport.”

Oliva Jr.’s natural drive can be seen in the extraordinary trajectory of his career. Starting at 140 pounds, he put on 30 pounds of muscle in his first three months, and continued to transform his physique as he climbed through the weight classes. Currently, he competes in top form, packing 270 pounds of muscle on his six-foot frame.

“When Sergio sets his mind to doing something, there’s no stopping him,” says Sidani. “And we know he’ll bring the same dedication and tenacity to his role as a brand ambassador – we’re thrilled to have him with us.”

Old School Labs™ is the maker of premium supplements that carry on the fitness philosophy of the “Golden Era” of bodybuilding. Old School Labs products do not hide behind proprietary blends, contain no artificial sweeteners or artificial flavors, and are manufactured using only high-quality ingredients. Old School Labs products include Vintage Burn™, a fat-burner designed to help preserve muscle while eliminating fat, Vintage Build™, a 3-in-1 muscle-builder, and Vintage Blast™, the world’s first two-stage pre-workout. Old School Labs has been featured in prominent publications including L.A. Confidential Magazine and Haute Living Magazine.

Old School Labs™ Press Kit H2 2017Read about us, our products, and values.