Seton Hall announces the results of a new independent analysis that looks at the University's economic and broader societal impact, totaling over $1.6 billion and almost 50,000 hours of aggregate service to the community annually. 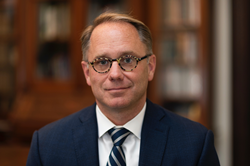 "We are also pleased to be an externally-looking, active, and engaged citizen of the region, state and nation. Our economic and societal impact goes to the heart of our mission," said University President Joseph E. Nyre.

Seton Hall University provides a significant impact on New Jersey’s economy, totaling over $1.6 billion annually, according to a new, independent analysis that looked at the societal and economic impact of the University through an assessment of its annual operations, capital investments, ancillary spending, and the additional earnings or “wage premium” of its 100,000+ alumni.

The study, conducted by Philadelphia-based Econsult Solutions, Inc., also included a survey of volunteer service performed by students, faculty and employees, showing that 3,000 volunteers provide almost 50,000 hours of aggregate service to the community each year – in addition to the economic impact.

“Since 1856 Seton Hall has been dedicated to being a home for the mind, the heart, and the spirit,” said University President Joseph E. Nyre. “We are also pleased to be an externally-looking, active, and engaged citizen of the region, state and nation. Our economic and societal impact goes to the heart of our mission. Our students, faculty and staff are each day challenged to prove What Great Minds Can Do – at Seton Hall and in the world at large.”

Seton Hall’s campuses in South Orange, Newark, Nutley and Clifton support more than 9,700 jobs throughout the state; in addition, the impact of the University’s spending on operations and capital improvements alone average in excess of $600 million annually.

Ancillary spending in the community – that of students, visitors and event participants, including those who attend Seton Hall cultural and sporting events such as men’s basketball games, totals $68 million per year. The Seton Hall men’s basketball team plays its home games in New Jersey’s largest city, Newark.

The wage premium, the amount in additional salary that the University’s alumni receive because of their Seton Hall education and their degree, totals $927 million per year in the State of New Jersey.

“This study confirms what New Jerseyans have long known: Seton Hall is an economic and social powerhouse that is pivotal to the state’s economy,” said Governor Richard Codey (NJ-27). “Its graduates populate the highest levels of numerous fields, including business, law, healthcare, education, science, and government. I am proud to represent the University in the New Jersey Senate as part of the 27th District.”

Michele Siekerka, President and CEO of the New Jersey Business and Industry Association agreed: “Seton Hall is at the forefront of educational institutions in our state. And its contribution to the vitality of our economy is evident – not only as a creator and supporter of jobs, but also through its preparation of well-trained and work-ready graduates to fill them.”

The study also examined the economic impact on those earning a Seton Hall degree over the course of a career, noting, “a recent analysis by the Center for Education and the Workforce at Georgetown University found that Seton Hall produces a 40-year return on investment totaling about $1.2 million per alumni. Said another way, the education and credential a graduate receives at Seton Hall provides an additional $1.2 million in earnings over the course of that graduate’s career.”

The Georgetown analysis uses data on the average net price and salary/earnings from the U.S. Department of Education’s College Scorecard. Notably, it ranked 1,761 public and private colleges and universities in the United States (that confer bachelor’s degrees) for return on investment over the course of a graduate’s workforce career. The additional $1.2 million in earnings for Seton Hall graduates placed the University at 191 among the 1,761 schools, or within the top 11 percent.

“This earnings metric is significant because it captures educational return on investment (ROI) over the course of a career,” said Seton Hall Provost and Executive Vice President Katia Passerini. “Seton Hall has been lauded by ranking organizations across the United States and is regularly included in The Princeton Review’s Best Colleges, as well as U.S. News & World Report – which this year ranked the University among the top third of all national universities; and The Wall Street Journal/Times Higher Education ranking, which placed Seton Hall among the top 35 percent of the "Top Colleges and Universities" nationwide. It does not surprise me, however, that we placed even higher in an analysis that focused solely on ROI.  Seton Hall graduates are using their college experiences to go on to successful, productive careers.”

Delivering a top-ranked ROI for its graduates presumably begins with fostering opportunities to attend. As part of its Affordability Initiative, Seton Hall provided over $149 million in scholarships and financial aid in the most recent academic year. The study notes, “These dollars are the difference between access and inaccessibility for many students and their families. And for all aid recipients, they fundamentally improve the ‘return on investment’ (ROI) proposition that so many students and families must account for when deciding whether and where to go to college. Lowering that upfront cost increases the ROI for students.”

The University’s activities further spur spending and investment that produces significant tax revenues at the federal, state, and local levels.

Nationally, over $368 million is generated annually, while the State of New Jersey receives an additional $64 million per year. This impact is felt locally, too, as small businesses benefit from myriad direct and indirect spending from university activities.

Seton Hall averaged $39 million annually in investments in new buildings, major renovations, and large-scale maintenance projects on its campuses. Significantly, that number is expected to increase over the next few years as substantial building projects and improvements are underway with more expected.

Beyond Finances: Investing in the Good of the Community Through Education and Service

Seton Hall’s impact was found to extend well beyond these econometric measures.  Significant service programs undertaken by the University as part of its mission provide additional, impactful value to its local and regional communities.  The report made particular note of this, adding, “the broader returns the University produces for the community, region, and society,” that come from its “core functions of education, research, and service…yield profound benefits to the neighborhoods immediately surrounding campus as well as to society as a whole.”

As noted prior, throughout the University more than 3,000 volunteers provide approximately 50,000 hours of service to the community each year, and the study highlights a number of projects which entail the “integration of education, research, and service through various volunteer and service-learning efforts.”

Free Legal Services to the Community

Included among these examples is the Law School’s Center for Social Justice, an amalgamation of pro bono legal clinics that offer free legal services to area residents. The report notes that in academic year 2021 alone nearly 18,000 hours of legal services valued at almost $2.2M were provided free of charge to members of the community, many of whom reside in Newark and adjacent cities.

At the request of the State of New Jersey, the Law School’s Center for Health & Pharmaceutical Law “regularly produces public policy papers addressing health care access issues being addressed by the state or local public health initiatives. Obtaining these services from consulting firms would cost the state of New Jersey millions of dollars.” In addition, the report notes that “the Greater Newark Healthcare Coalition comprises significant decision makers in the City of Newark who tackle some of the most enduring health care challenges in the city.” Seton Hall Law faculty, students and the Center for Health & Pharmaceutical Law play a prominent role in the Coalition.

The report notes the work of the Center for Community Research and Engagement (CCRE), which was established in 1997 to address the needs of Seton Hall’s neighboring urban communities in partnership with nonprofit organizations and community residents. “A recent signature of CCRE is its Seton Hall Experiential Learning and Leadership through Service (SHELLS) program,” it states. “This program is designed to expose students to careers and opportunities to serve in the nonprofit sector by expanding the service-learning program at the University through the integration of academic and community-based intellectual work.”

The report also showcases the School of Nursing Community Health Clinical Experiences, the School of Law Leadership Fellows Program initiatives, as well as the Market Research Center, which provides direct technical assistance to businesses throughout the region.

Mentioned also is the Community Care & Justice (CC&J) program, a newly formed effort among a University faculty member, South Orange Village and Essex County. The Initiative is an initial attempt to reimagine traditional models of law enforcement by putting a greater emphasis on wellness and crisis prevention while embedding care and compassion into all facets of police operational strategies. The report notes, “This is of relevance to town and gown alike, as the University serves 10,000 students with diverse backgrounds while 35 percent of South Orange Village’s 17,000 residents are people of color, so it is noteworthy that the University has invested in deep engagement on this critical quality of life issue.”

Upward Bound and Other Investments in Local K-12 Students

The University administers “a robust Upward Bound program, which provides critical pre-college exposure to (131) high school students from limited income families who will be first generation college students.” The study further reports that “the University is a regular supporter of local schools such as Columbia High School and Cristo Rey Newark High School. Seton Hall students participate in service efforts, including tutoring opportunities in the South Orange-Maplewood School District and the ‘Pen Pal Day’ initiative that pairs University athletes with students in Newark.”

Highlighted also is Seton Hall Law’s sponsorship of a pipeline Institute for Pre-Legal Studies, its special admit Legal Education Opportunity Program, and its partnership with NJ LEEP, which has “opened the door of opportunity to thousands of students from Newark and the surrounding areas, providing dedicated scholarships to graduates of these programs as well as Newark residents.”

“At Seton Hall we invest in our students and in our communities,” said President Nyre. “They are in a sense one in the same and our mission as a Catholic university requires it. This analysis has quantified that to some extent – but in many ways it’s the unquantifiable aspect that most resounds: At Seton Hall we cultivate involved and caring citizens and do our best to be good neighbors.”

One of the country’s leading Catholic universities, Seton Hall has been showing the world what great minds can do since 1856. Home to nearly 10,000 undergraduate and graduate students and offering more than 90 rigorous academic programs, Seton Hall’s academic excellence has been singled out for distinction by The Princeton Review, U.S. News & World Report and Bloomberg Businessweek.

Seton Hall embraces students of all religions and prepares them to be exemplary servant leaders and global citizens. In recent years, the University has achieved extraordinary success. Since 2009, it has seen record-breaking undergraduate enrollment growth and an impressive 110-point increase in the average SAT scores of incoming freshmen. In the past decade, Seton Hall students and alumni have received more than 30 Fulbright Scholarships as well as other prestigious academic honors, including Boren Awards, Pickering Fellowships, Udall Scholarships and a Rhodes Scholarship. The University is also proud to be among the most diverse national Catholic universities in the country.

In recent years, the University has invested more than $165 million in new campus buildings and renovations. The University’s beautiful main campus in suburban South Orange, N.J. is only 14 miles from New York City — offering students a wealth of employment, internship, cultural and entertainment opportunities. Seton Hall’s nationally recognized School of Law is located prominently in downtown Newark. The University’s Interprofessional Health Sciences (IHS) campus in Clifton and Nutley, N.J. opened in the summer of 2018. The IHS campus houses Seton Hall’s College of Nursing, its School of Health and Medical Sciences as well as Hackensack Meridian Health’s Hackensack Meridian School of Medicine.