William J. Connell receives prestigious 2019 Andrew Carnegie Fellowship to research migrant labor in Renaissance Florence. His project explores the structuring of Florence's society around the city's political, scholarly and artistic achievements as well as what citizenship looked like in an early modern state versus in classical antiquity or the medieval commune. 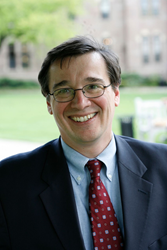 The issuance of these numbered permits for categories of outsiders is evidence that a new conception of citizenship was taking hold.

William J. Connell, Professor of History and Joseph M. and Geraldine C. La Motta Chair in Italian Studies, has been selected a 2019 Andrew Carnegie Fellow. As a recipient of the so-called “Brainy Award,” the fellowship includes a $200,000 grant to devote significant time to research, writing, and publishing in the humanities and social sciences.

Connell’s project, Tracking Migrant Labor in Renaissance Florence, researches the ending of a century-old policy of free immigration and the passage of a law requiring foreign workers to register with the state by purchasing numbered annual work permits.

“My discovery in Florence’s Archivio di Stato of the registers recording deliveries of these work permits over a 40-year period, from 1473 to 1512, means for the first time we can measure this substantial population. Particularly intriguing is the way data analysis can be applied to these records to demonstrate in a very precise way, how this extremely mobile population fluctuated over time in response to growth or downturns in the economy, and also around war or plague,” said Connell.

The Carnegie Fellowship supports Connell’s efforts to shed important light on this topic, looking at the structuring of Florence’s society around the city’s political, scholarly and artistic achievements as well as what citizenship looked like in an early modern state versus in classical antiquity or the medieval commune.

“The issuance of these numbered permits for categories of outsiders is evidence that a new conception of citizenship was taking hold. The lower classes of laborers who were native to Florence, for example, did not have to purchase permits for their work,” explained Connell, sharing that this research mirrors some of the conversations still going on around immigration, refugee and labor issues today.

“Professor William Connell has been one of our scholarly treasures for years and we are very proud of his accomplishment in being selected as a Carnegie Fellow. An international expert on Machiavelli, Dr. Connell is highly qualified for this project having published a series of original studies on Renaissance Florence and Machiavelli, additional books on Italian and Italian-American culture more broadly, and a highly-regarded translation of Machiavelli’s Prince. The range and dedication of Dr. Connell’s teaching on both the undergraduate and graduate levels serve a thriving research enterprise that is acclaimed and systematic,” said Mary J. Meehan, Ph.D., Interim President.

A distinguished panel of 16 jurors chose the fellows based on the quality, originality and potential impact of their proposals, as well as each scholar’s capacity to communicate the findings to a broad audience. The jurors are all scholars and intellectual leaders from the some of the world’s leading educational institutions, foundations, and scholarship societies – and six are either current or former university presidents. For 2019, the Corporation received a total of 273 nominations. Each underwent a preliminary anonymous evaluation by national experts in the relevant fields. Then, the top proposals were forwarded to the members of the jury for review and the final selection of 32 fellows for the Class of 2019.

“Andrew Carnegie believed in education and understood its influence on the progress of society and mankind. The Andrew Carnegie Fellows Program is an integral part of carrying out the mission he set for our organization,” said Vartan Gregorian, president of Carnegie Corporation of New York and president emeritus of Brown University. “Over the past five years, we at Carnegie have been very impressed by the quality, range, and reach of our fellows’ work. This year is no exception. We salute this year’s class and all of the applicants for demonstrating the vitality of American higher education and scholarship.”

Carnegie Corporation of New York was established in 1911 by Andrew Carnegie to promote the advancement and diffusion of knowledge and understanding. In keeping with this mandate, the Corporation’s work focuses on the issues that Andrew Carnegie considered of paramount importance: international peace, education and knowledge, and the strength of our democracy.

Connell, founding director of the Charles and Joan Alberto Italian Studies Institute and co-editor of The Routledge History of Italian Americans (2018), has received numerous recognitions including fellowships at Harvard’s Villa I Tatti and the Institute for Advanced Study in Princeton, the Mille Grazie Award of UNICO National, and the Presidential Award of the Columbian Foundation. Twice he served as a gubernatorial appointee on the New Jersey Italian Heritage Commission. In 2016, he received the Monsignor Joseph Granato Italian Culture Medal of Seton Hall University.

To learn more about the Andrew Carnegie Fellows and the 2019 winners, visit http://www.carnegie.org/awards/andrew-carnegie-fellows/2019/.

One of the country’s leading Catholic universities, Seton Hall has been showing the world what great minds can do since 1856. Home to nearly 10,000 undergraduate and graduate students and offering more than 90 rigorous academic programs, Seton Hall’s academic excellence has been singled out for distinction by The Princeton Review, U.S. News & World Report and Bloomberg Businessweek.

Seton Hall embraces students of all religions and prepares them to be exemplary servant leaders and global citizens. In recent years, the University has achieved extraordinary success. Since 2009, it has seen record-breaking undergraduate enrollment growth and an impressive 110-point increase in the average SAT scores of incoming freshmen. In the past decade, Seton Hall students and alumni have received more than 30 Fulbright Scholarships as well as other prestigious academic honors, including Boren Awards, Pickering Fellowships, Udall Scholarships and a Rhodes Scholarship. The University is also proud to be the third most diverse national Catholic university in the nation.

During the past five years, the University has invested more than $165 million in new campus buildings and renovations. And in 2015, Seton Hall launched a School of Medicine as well as a College of Communication and the Arts. The University’s beautiful main campus in suburban South Orange, N.J. is only 14 miles from New York City — offering students a wealth of employment, internship, cultural and entertainment opportunities. Seton Hall’s nationally recognized School of Law is located prominently in downtown Newark. The University’s Interprofessional Health Sciences (IHS) campus in Clifton and Nutley, N.J. opened in the summer of 2018. The IHS campus houses the University’s College of Nursing, School of Health and Medical Sciences and the Hackensack Meridian School of Medicine at Seton Hall University.