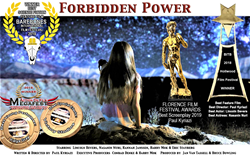 "What happened to you at the meteor crater?"

For an instant press screener on your PC, contact: paulkyriazi@yahoo.com

Cult movie director Paul Kyriazi is back, after a 30 year absence from feature films, with twenty-eight first-place, international film festival awards and a totally original concept: A young man has a one-night stand with a beautiful woman and wakes up with enhanced physical and mental powers.

In other movies, such as Limitless, LUCY and Wolf, the hero's powers comes from drugs or animal bite. But the hero in Forbidden Power gets his new powers from sexual contact. Then, he’s left with a cryptic message written in lipstick on his mirror: short – red- train. He goes on a search for the woman to find out where she got her exceptional powers and why she chose him to pass it onto.

Forbidden Power’s list of awards includes; five for Best Screenplay, including one from Florence, Italy, two Best Actor each for the three leads and Best Picture at the NYC Cinematographer awards, which was helped by filming with the RED Dragon digital camera that was used on Gone Girl & Jurassic World. (List of awards below)

In his past movies, Death Machines, Ninja Busters, Weapons of Death & Omega Cop, Kyriazi always had a weird story slant to the action and an ambition beyond what his budgets would seem to allow. Omega Cop, for example, had Adam (Batman) West, Troy Donahue and Academy Award nominee Stuart Whitman in the cast.

Forbidden Power has a train wreck that knocks over the Statue of liberty replica of the New York, New York Hotel in Las Vegas. This happens in the middle of the movie to “keep the audience awake”, Kyriazi says. Other techniques to keep people from turning channels is a ‘quickly unfolding story, weird and surprising action, changes of location; San Francisco, Seattle, Arizona, Las Vegas, and six beautiful women that are introduced throughout the movie.

When asked, “Why did you wait thirty years to make another movie?” Kyriazi replied. “Two important things happened. Digital production is more efficient and less expensive than film. And most important, in the past distributors of my movies never sent my percentage to me. Nothing. Zero. Now with Amazon and Vimeo, I get daily reports and monthly deposits into my bank.”

Forbidden Power is available for streaming on Amazon: https://amzn.to/2nszuEJ and Vimeo: https://goo.gl/1AL6cL

For a press screener of Forbidden Power, contact paulkyriazi@yahoo.com.

Below is the list of all the first-place festival wins. (All festivals are IMDB sanctioned.)

Paul Kyriazi saw 'The Making of 20,000 Leagues Under the Sea' when he was eight years old and decided to make movies. Two of his university karate action movies won the Berkeley Film Festival. He got a BA in Film, shot movies for the Nasa Space Program and wrote / directed seven feature films.

"From now on, do what I say or Cathy is dead. Now get into bed."

"That's when I realized she had passed her power onto me."