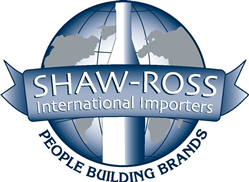 Shaw-Ross International Importers (Shaw-Ross), one of the nation’s leading importers representing over thirty prestigious suppliers from around the world, today announced a planned transition of its leadership team, with Scott Jove, currently the Vice President, Sales & Marketing, to become the Company’s President in January 2023. Bruce Hunter, Managing Director, will remain in his current role through the end of 2023 working closely with Mr. Jove to ensure a smooth transition. Following the end of his tenure as Managing Director and beginning in 2024, Mr. Hunter will remain with the Company as a senior advisor.

As President, Mr. Jove will lead all aspects of the business with a focus on sales, marketing and supplier relations. Mr. Jove joined Shaw-Ross in 2015 as Manager, Commercial Strategy, and was named to his current role of Vice President, Sales & Marketing in 2017. In this role, Mr. Jove was successful in bringing a fresh perspective to the commercial team at Shaw-Ross.

“I’m incredibly honored to be part of an organization with such great history,” commented Mr. Jove. “Thanks to Bruce’s leadership, industry knowledge, and dedication to our industry, Shaw-Ross went from a boutique business to now representing the world’s finest wine and spirit brands in the U.S. market. I want to thank Bruce for his continuous mentorship and look forward to continuing to work with him to help build on Shaw-Ross’s long-term success.”

Mr. Jove holds a BA from Duke University and both a JD and an MBA from the University of Miami. Before joining Shaw-Ross, Scott spent time in the financial services industry with Grant Thornton and in management consulting with AT Kearney. A licensed attorney in the state of Florida, Mr. Jove brings a unique skill set to Shaw-Ross, which enabled him to take a major role in the recent restructuring of the Company.

Bruce Hunter originally joined Shaw-Ross in 1995 as Executive Vice President, Director of Wines. He was appointed Executive Vice President, Director of Marketing in 1998 and oversaw the expansion of the marketing department by developing a professional brand management structure. Mr. Hunter was appointed Managing Director in 2004. He brings 52 years of domestic and international experience in the wine and spirits industry, starting in 1970 with Almaden Vineyards and then with Parrott and Company in 1973, serving as its president from 1984 to 1995.

“Scott has everything it takes to carry Shaw-Ross and its great team into the future,” said Mr. Hunter. “His commitment to innovation, steadfast integrity and ethics, and focus on cultivating a team of creative professionals, will make him a great leader. I look forward to working closely with him and proudly witnessing the results of his leadership firsthand.”

About Shaw-Ross International Importers
Founded in 1968 as a boutique wine and spirit importer representing a handful of brands, Shaw-Ross is one of the nation’s leading importers representing over thirty suppliers from around the world whose brands enjoy full national distribution through a network of outstanding wholesalers.

About Colangelo & Partners
Colangelo & Partners is the leading fine wine and spirits integrated communications agency in the United States, sought after by top brands and industry players for the quality of their results, creativity, and return on investment. The professionals at Colangelo & Partners work with integrity and passion to influence how US audiences perceive their clients: earning consistent, high-quality positive media coverage; organizing signature events; strategizing and executing standout digital campaigns; and implementing trade programs that strengthen relationships within the industry. Colangelo & Partners' clientele includes global, instantly-recognizable brands and passionate, up-and-coming vignerons and distillers; regional and national institutions; and technology and e-commerce companies innovating in the beverage alcohol sector.