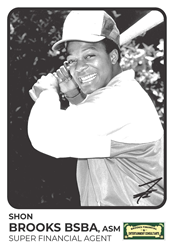 My entire mission is to boost the ratings for all our partners.

Brooks Entertainment Inc. signs contract with Entercom (CBS Radio) which is the owner of The Padres Radio Network. 97.3 THE FAN is broadcasting "the most anticipated MLB season in history as people across San Diego turn to the Padres for something positive they can cheer for during this pandemic!" CBS Radio merged with Entercom Communications Corporation which is a publicly traded American broadcasting company and radio network based in Philadelphia, Pennsylvania. Founded in 1968, one of the largest radio companies in the United States, owning 235 radio stations across 48 media markets.

Shon Brooks ® is one of the "STARmeter" leaders in "Search" categories for the Internet Movie Database (IMDB). As noted, he is a Time Warner-TV Editorial Excellence Award Winner for covering the Olympic Games, Game Changer by Invention Magazine, named Superhero by On Wall Street Magazine, "Advisor.CA" Magazine, and Financial Planning Magazine. Brooks Entertainment Inc. has R.O.C.K.E.D the charts as one of Smoke Magazine's top 36 cigar manufacturers in the world with the invention of the S.O.B ® luxury premium cigar for Pop Culture. Explicitly, the Brooks Entertainment Inc. brands has officially opened 3 new United States S.O.B® Shon Brooks Star Cigar® Pop-Up Shops in the light of signing a contract with Entercom. The Shon Brooks Star Cigar® pop-up retail stores are aimed at increasing tourism for the tri-city of Chula Vista, National City, and San Diego, California. The S.O.B ® cigars were released for sale at CH Cigars & More, The News Stand, and the Hard Rock Rock Shop. Uniquely, each pop-up shop has geographic symbolism and adds another tour destination to visit for international travelers searching for the Shon Brooks® Tour Stop merchandise and Brooks Financial & Entertainment Consultants brands for souvenirs.

Notably, "Entercom is the unrivaled leader in local radio sports and news and the #1 creator of live, original local audio content in the U.S. Entercom engages over 170 million consumers each month through its premier collection of 230+ highly-rated, award-winning radio stations, offering 90% coverage of the top 50 markets and streaming 24/7 everywhere." When Inventor, Shon Brooks® was asked what was it like to be invited into the Entercom/ CBS studio to record? He says, "It was truly an honor to be invited inside the Entercom/ CBS Studio especially to record! My entire mission is to boost the ratings for all our partners from being on the air. I definitely want to thank the entire staff for the opportunity and it was a dream that came to fruition. Also, it was extremely exciting to work with the excellence in Mac Pitts, the scriptwriter, and the music editor, Mike Hansen, inside the control room. As I approached the professional audio microphone in the noise cancellation quarantined studio, it reminded me of playing sports as a student. It made me reflect that no matter what the score was...I always had a chance to win the game if I practiced, played smart, and embraced the pressure. Life is the same way, even though one may appear to be behind, with a little poise, he or she always has a chance to win."