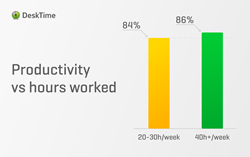 Employees who work six-hour workdays are just as productive as those who spend eight or more hours in the office, according to a new study by DeskTime, the employee time tracking and productivity app.

Data shows that the average productivity rate for people who work eight or more hours a day is 86%, whereas for people with a six-hour workday it’s 84%. That's a two percentage point difference.

''Once again, data shows that more hours don’t translate into higher productivity. This supports the findings from one of our previous studies that showed that the most productive people are actually those who take more breaks and thus, overall, spend fewer hours at the computer, i.e., ''work less''. So, recalling the recent initiative by the Prime Minister of Finland to introduce a six-hour, four-day workweek is an idea worth supporting and companies in other countries might want to give it a try, too.'' – Artis Rozentals, CEO of DeskTime

Methodology
In November 2019, DeskTime analyzed productivity data of 7300 of its users by comparing the productivity of users who worked, on average, six or fewer hours a day to those who worked eight or more hours a day.

About DeskTime
DeskTime is an automatic time tracking and productivity analysis software used by 8600 companies and 184,000 users worldwide. The app tracks the time users spend on different websites, apps, and programs that are categorized into productive or unproductive, and automatically calculates users' daily productivity.