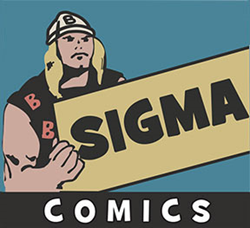 Humans have superheroes. Animals don’t. That’s about to change.

SIGMA COMICS, LLC, a comic book publisher dedicated to fighting animal abuse, launched today with a logo that many comic book fans of the last century will recognize. The Sigma Comics logo features pioneering comic book dealer, Robert Bell’s, ‘superhero’ figure, which was a prominent fixture in comic books from the 1960s through the 1980s. The figure was featured in all of Bell’s mail order business advertisements of the time, and ushered in the advent of purchasing past issues of comics books through the mail, which helped increase the popularity of comic books.

Company founder, H.H. German, feels honored to continue Mr. Bell’s legacy. “I remember seeing Mr. Bell’s advertisements as a kid, in all my comic books,” said German. “He’s a fearless, rugged individual. I mean both the figure and Mr. Bell. We had lots of logo ideas but I wanted it to be a symbol of that rugged individualism that is at the foundation of what it means to be an American.”

While Sigma Comics’ first title was still in development, German approached Bell with his special request. “I just looked him up, called him and asked for his permission,” said German. “I explained who I was and what I was trying to do and he said yes. Needless to say, I was very happy.” For his part, Bell said, “I am honored to be remembered in the comic book industry after all these years.”

Sigma Comics plans to release their first title, which features a character that German describes as “one tough customer,” by Christmas time. “Humans have superheroes. Animals don’t. That’s about to change,” said German. Visit the Sigma Comics Website at https://www.sigmacomics.com.

About SIGMA COMICS
SIGMA COMICS, LLC is a comic book publisher dedicated to fighting animal abuse. The company’s goal is to reach a growing audience of readers across the globe, in order to promote animal rights advocacy and provide a powerful mechanism for animal rights charities to promote their efforts. For more information, visit https://www.sigmacomics.com.

About Robert Bell
An absolute legend and pioneer of the comic book industry, Robert Bell inspired many of today’s most respected comic book veterans, such as Chuck Rozanski, from the unrivaled Mile High Comics, to respected authors, such as Dan Gearino, author of Comic Shop: The Retail Mavericks Who Gave Us a New Geek Culture, available at Amazon.com. His legacy lives on through Sigma Comics.
Learn more about Robert Bell:
https://www.milehighcomics.com/tales/cbg186.html
https://dangearino.com/2017/09/16/682/