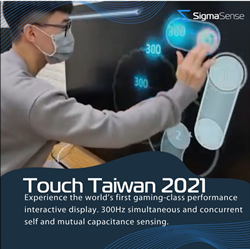 Now we can turn screens into gaming centers where you could have multiple players around the table and all with hands and fingers on the screen Said Rick Seger, SigmaSense CEO

SigmaSense's® new gaming class performance in a tabletop display creates all new possibilities for game developers. Finally, game piece recognition, pucks, and pens can be used for more immersive games while high fidelity capacitive imaging enabled by much faster data acquisition will change the limits of the gaming experience. The availability of high speed, high fidelity touch data has opened the door for tabletop gaming from 20 inches up to 100-inch tables with support for "gang play," whether the gang is there to compete or to play as a team.

The performance of SigmaSense's gaming tabletop is a breakthrough for the industry. Touch controls will deliver an even faster response than what can be achieved with high-speed gaming mice, and contaminants like a spilled drink will not interfere with touch responses.

"Even a simple hockey game on a 55 inch or a 65-inch screen has never been possible with low lag, until now,” said Rick Seger, SigmaSense CEO, “Now we can turn screens into gaming centers where you could have multiple players around the table and all with hands and fingers on the screen, playing games, collaborating, competing, but in a fast-paced world where a hockey puck may be flying around, or multiple aliens may be invading.”

ABOUT SIGMASENSE
SigmaSense, the global leader in touch sensing performance, is bringing the best user experiences to products ranging from mobile phones and laptops to large monitors and digital signage. We are pioneering a comprehensive sensing technology that delivers 100 to 1000 times improved signal-to-noise performance that was previously not possible. SigmaVision™ capacitive imaging technology provides touch, pressure and object detection to the sensing surface, enabling a new generation of perceptive devices that are interactive and engaging. SigmaHover™ provides a superior touchless experience for public displays as well as any other device that uses touch sensors. Headquartered in Austin, TX, SigmaSense provides semiconductor products with development tools and support. For further information, please visit http://sigmasense.com.