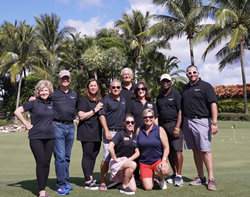 Welcoming the day with a variety of golfers at the prestigious Gleneagles Country Club, Nov. 7, 2019, Signature Gives Back (SGB), the philanthropic arm of The Signature Real Estate Companies (Signature), rang in the day’s charge of fundraising, saluting veterans worldwide and hosting 8-year-old, one-arm golf prodigy, Tommy Morrissey, for another highly successful golf tournament.

“Events such as charity golf tournaments require a lot of creativity, hard work, and perseverance. We certainly were blessed to have so many passionate and hard-working volunteers,” says Jack Jaiven, SGB Committee Co-Chair and Executive Vice President & Principal of Signature.

Says Pressner, SGB Committee Co-Chair, “We placed a fantastic amount of energy and passion into producing this tournament and, because of this, we executed a highly successful event. Ivan M Benjamin, Jr., a fellow Vice President on the SGB Board of Directors, agrees.

“Our team members prove to our other SGB stakeholders that working together persistently and with allegiance is the best route we can take to serve our community’s ongoing needs. There are many, and ours is an open-door policy. We listen carefully to learn how we can help.”

Broker-President & Principal of Signature, Ben G. Schachter, took the day to attend the tournament and had this to say upon reflection:

“Moderating the awards cocktail reception and silent auction, spending time with Tommy and all of our guests, I couldn’t think of any place more important to be that day. Helping children is chief among our goals. Our Signature team members represent the best and brightest of philanthropists, providing frequent funding and volunteer hours to several local charities, including The Soup Kitchen, Habitat for Humanity, Forgotten Soldiers Outreach, and an impressive array of other charities.”

Last month, during a tour of the unLIMBited Foundation at The Paley Institute, SGB Board of Directors officers visited the youngest of its grant recipients, two-year-old Dameon Hunt of North Carolina, following his second (successful) surgery to lengthen both legs. Proceeds from last year’s SGB-sponsored golf tournament played a crucial role in supporting Dameon and his family with their housing costs during and after his surgery. The unLIMBited Foundation at The Paley Institute coordinated his surgical and housing plans, with Tommy’s mom and Honorary Chair of the golf tournament, Marcia Morrissey, at the helm.

Also, in October, Pressner, Benjamin, Jr., and LeComte joined The Morrissey Family at an intimate fundraiser, “Barrels and Bites,” hosted by The Paley Institute’s namesake, surgeon Dr. Dror Paley, and his wife. The takeaway was a strengthened resolve to convey to fellow Signature team members and SGB supporters the intricacies of complex limb-correction surgery and the ongoing housing accommodations needed by pediatric patients and their accompanying families.

Signature Gives Back encourages all Signature team members to “Be the Change You Wish to See in The World.” Learn the best way through SignatureGivesBack.com.

For more trending news about Signature, visit SignatureRealEstateCompanies.com and SignatureFlorida.com.