Brett Black's ground-breaking album "Silent Tracks of Various Useful Lengths" is steadily finding an audience and proving that silence really is golden. Black says that he is at a loss for words, with sales of his silent music now approaching 2,000 tracks through iTunes alone, but attributes many of the silent MP3 downloads since the album's release in April 2010 to people looking for a silent ringtone. 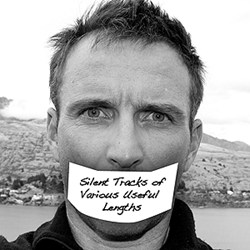 Some of my friends are hoping Coldplay will cover it at some point.

The Mafia is notorious for trying to buy it, some look for it on meditation retreats, most new parents would gladly trade their fortune for any in the middle of the night, but many don’t realize silence is available for a song online. New Zealand recording artist Brett Black recently broke silence on his album of silent music, “Silent Tracks of Various Useful Lengths”.

“I’m at a loss for words at the level of sales, since I released it in April 2010. We're now approaching 2,000 downloads of silent songs through iTunes alone. I woke up one morning with a little silent music repeating over and over in my head, and thought, ‘wow, this is catchy.’ It was also timely because I’d been looking for an easy way to put a silent song into a playlist I was working on. A silent MP3 seemed like the logical solution and I was surprised to find it wasn’t commercially available, until now,” says Black.

As global sales have steadily built over time, he believes his work has become a useful escape from the cacophony of modern life. It’s also being put to good use by gym instructors, public speakers, choreographers or anyone looking for a silent MP3 or silent ringtone. “It sounds like quite a few people have downloaded the tracks to use as a silent ringtone on their phone, which they can assign to their least favorite contacts,” says Black. “However, if you're wanting the songs for a quite moment at home, I suggest listening at moderate volume on noise-cancelling headphones.”

He cites French mime Marcel Marceau and avant-garde composer John Cage, who penned a three-movement silent composition entitled 4’33”, as inspiration, but insists his album is not merely about creating a statement. “I wanted to take silence to new levels,” says Brett of his silent music, which is the first silent commercial album ever released. “Some of my friends are hoping Coldplay will cover it at some point,” says Black.

"Silent Tracks of Various Useful Lengths" is available for digital download at http://brettblacksilenttracks.com or via iTunes and Amazon.

Brett leads an unusually quiet existence in Tauranga, New Zealand. You can connect with Brett Black via his website or Facebook page.