In a major milestone for its mining industry, Afghanistan issues its first large scale mineral development license in the last decade to Silk Road which becomes a leading mining player 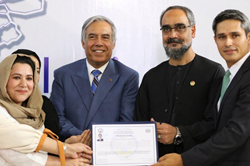 The Afghan Ministry of Mines and Petroleum today issued an exploration license to Silk Road Mining in a ceremony of Afghan government and business dignitaries in Herat City. The license covers the exploration and later exploitation of a copper deposit in the Shaida area of interest in Herat province. This is the first large scale mining exploration license issued by the government of Afghanistan in the last decade.

Silk Road, registered in Afghanistan, previously signed a contract for Shaida based on a competitive tender process initiated by the Ministry which was supported by multiple international donor organizations. Silk Road fulfilled the key prerequisites to the license including an environmental assessment and thus reached the stage of license issuance which will allow exploration activities to start.

Commenting on the Issuance of the License
Acting Minister of Mines and Petroleum Ms Nargis Nehan said, “The exploration company will invest $21.3 million to explore the copper mine. The first phase includes digging exploration drill holes and laboratory tests as well as technical training and capacity building for Afghan workers, this process would take three years.”

The Chairman of Silk Road, Sam Sidiqi commented, “Shaida is a very exciting prospect, and we are pleased that it is the first large scale mining exploration license to be issued by the Afghan Ministry of Mines and Petroleum. This positions Silk Road as the cornerstone of the mining industry in Afghanistan. Our team is committed to best practices in exploration, sustainable mining and local community engagement to ensure that we lead the sector to benefit Afghanistan and its people for the long term.”

Hamayon Qayumi, the acting Finance Minister commented, “the development and exploration of mines will reduce the country's dependence on foreign aid.”

In addition, the co-founders of Silk Road Mining, Sam Sidiqi and Christopher Logan have pledged that 20% of their personal equity ownership in Silk Road will be reinvested in social enterprises and the development of the mining sector in Afghanistan.

Local and regional geology
The Shaida property in Herat Province has been classified as a highly prospective copper porphyry deposit. Originally explored by Russian geologists in the early 1970’s, the property has been explored more recently by the Afghanistan Geological Survery and the United States Geological Survey. Shaida was selected as the most prospective copper porphyry deposit and one of the four most prospective gold or base metal deposits in Afghanistan for the government’s mineral tender process.

At a regional level, Afghanistan sits on the Tethyan Magmatic Arc, which spans from Eastern Europe through into Southeast Asia. World class copper porphyry deposits in this arc include Grasberg in Indonesia, OkTedi in Papua New Guinea on the eastern end, with Bor in Serbia and Rosia Poieni in Romania on the western end. The Central Tethyan region, which includes the underdeveloped Afghanistan portion, is home to world class copper deposits SarCheshmeh in Iran, and Reko Diq in Pakistan.