Michael Scott, owner of Simcoe Decks, builds gorgeous decks up to 5X faster in Southern Ontario's Cottage Country thanks to the CAMO Deck Fastening system of tools and fasteners. 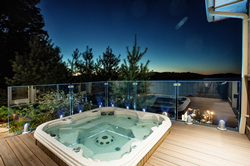 Simcoe Decks builds up to 5X faster with the CAMO Deck Fastening system.

We use CAMO deck products exclusively now, because we want to provide the best for our customers. It’s an amazingly easy system for my crew to learn—and if we ever have a problem, I know CAMO has our backs. -- Michael Scott, owner, Simcoe Decks

Michael Scott, owner of Simcoe Decks based in Barrie, Ontario, has selected the CAMO Deck Fastening system to build decks faster and more efficiently for the cottages in Southern Ontario. Michael and his crew had been using CAMO’s MARKSMAN Pro® and Edge Screws with a hand drill for edge fastening into the sides of the deck boards and joist. Now, they have been able to increase installation speed by adding CAMO’s stand-up DRIVE™ tool, with three end attachments for edge, clip and face fastening.

Using the edge-fastening attachment included with the DRIVE, Michael's crew installed decks faster while offering customers the same craftsmanship he prides himself on. Allowing for stand-up-fastening, DRIVE offers the additional benefit of getting his workers off their knees, saving not only time but the strain on their bodies.

Like most deck builders, the global pandemic and tightening market for softwoods were putting the squeeze on his business and crews. Simcoe Decks has had plenty of work, but needed to get it done efficiently and more quickly. Along with CAMO, they started building with steel frames, supplied by a local metal supply company while making the complete switch to composites.

As Michael continued to expand Simcoe Decks, he recognized that homeowners were becoming increasingly interested in low-maintenance composite decking and hidden fasteners. After experimenting with different brands and their proprietary clip systems, he discovered Deckorators’ grooved decking. To ensure the same level of consistent spacing as their edge-fastened decks, Michael began searching for a clip system that would create the same uniformity on every board they installed.

“Nobody thought clips could get better until CAMO introduced the EDGE® Clip,” said Michael. “After CAMO previewed their clips at the Deck Expo trade show, the deck building community created a huge buzz. Once we saw them on Instagram we reached out to our supplier and never looked back.”

The CAMO EDGE Clip (for 90-degree patterns) and EDGEX® Clip (for any pattern) quickly became their go-to clips after finding they worked well with Deckorators’ grooved decking.

Now, Simcoe Decks uses CAMO tools and fasteners on every deck, installing the clips with both his CAMO DRIVE tools and with hand drills using the NEVER-MISS Guide™ included in every pail of CAMO clips. “We go through anywhere between 20 and 30 large pails of clips a season, using them on just about every job,” said Michael.

As metal framed decks gained popularity during 2020’s lumber shortage, Michael began incorporating CAMO EDGEXMETAL® Clips into his projects to keep his competitive edge and easily fasten into metal. He found EDGEXMETAL Clips engage in seconds with the metal frame and were ideal for creating an angled “X” inlay pattern on a deck in Blue Mountains, Ontario, a ski resort area.

Typically, deck boards will be twisted or curved and need to be straightened before fastening. The CAMO LEVER® tool can lock-in rows of boards and clips on single, double and metal joists with just one turn. “Some of the boards were five or six inches apart, too tight for us to fit in a traditional clamp even if we reversed it, but we were able to fit in there with the LEVER,” said Michael. With smaller crews, one contractor can speed up their installations by aligning rows of boards and locking them in place to fasten, all while maintaining social distancing on the jobsite.

With the ability to build up to 5X faster with the CAMO fastening system, Simcoe Decks weathered 2020 and is now booked into 2021, ready to move from job-to-job with speed and efficiency.

“As a system, CAMO provides a fastener and a tool for every application,” he said. “We use CAMO products exclusively now, because we want to provide the best for our customers,” explained Michael. “It’s an amazingly easy system for my crew to learn—and if we ever have a problem, I know CAMO has our backs.”

About CAMO
CAMO exists to provide the best deck fastening installation experience for hardworking doers who take pride in their work and value their wallet. That’s you. Whether you install decks for a living, offer to help build them with a buddy, or maybe build just one in your lifetime, CAMO products are engineered to save you time and ensure your work looks and performs as you expect it should. CAMO®. The Better Way to Build a Deck. For more information or to locate a dealer, visit http://www.camofasteners.com or call 1-800-968-6245. Be sure to "Like" @camofasteners on Facebook and @camodeckfasteners on Instagram. Search CAMO Fasteners on YouTube to find our channel or check us out on Pinterest.