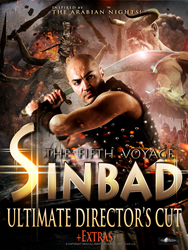 The exciting live action film is based on the Arabian Nights and Sinbad the Sailor’s fairy-tale adventures. It stars actor/director, Shahin (Sean) Solimon, who has been acknowledged as the first Persian-American actor to play ‘Sinbad The Sailor’ in an American made film. ‘Sinbad The Fifth Voyage - Ultimate Director’s Cut’ also features stop-motion VFX, which was brought to mainstream by legendary VFX artist Ray Harryhausen in the late 50’s. Creatures such as the Cyclops, the Goliath Crab monster and, yes, old-school, Skeletons in the dead tree forest to name a few. The much anticipated director’s cut features several new scenes and a more expanded storytelling between Sinbad and Princess Parisa.

“I have always been a fan of the Arabian Nights and the early stop-motion Sinbad movies created by Ray Harryhausen. I am truly grateful for the chance to be a part of this creative process on both sides of the camera .“ - said Solimon. “Having an opportunity to do an Ultimate Director’s Cut of ‘Sinbad’, and with a great team of artists adds so much more that ties the movie together. It’s almost a whole new film. We wanted to create something for the fans of Sinbad and bring back a taste of the traditional classic style of movie making and I believe we have done that. I am very excited and looking forward to developing and extending this Universe of Sinbad The Sailor!”

Solimon is said to also be hard at work on developing another project based on stories of Sinbad The Sailor of the Arabian Nights. You can get more info from the director’s Facebook https://www.facebook.com/shahinsolimon

With core genres of Fantasy, Sci-fi, Horror and Action-Adventure Giant Flick LLC is a down-to-Earth production and distribution company based in Hollywood, CA and run by artists that believe in social equality, green renewable energy and great storytelling!