Award-winning Pianist and Composer Jennifer DeFrayne Shares Sisu with America in her Second Recording, Inspired by all that the Finnish Quality Epitomizes 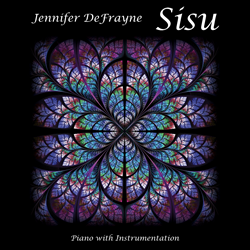 "Each song on this album embraces the spirit of sisu in one way or another, and each song is meant to reflect the many characteristics of sisu."

The melting pot known as America includes many cultural ingredients, and Finnish-American pianist Jennifer DeFrayne is playing her part to contribute the special spice known as “sisu.” Her sophomore album (titled Sisu) is co-produced with Corin Nelsen, and releases globally today via her independent record label, Palo Isle Music; it is available in physical CD or digital form, on Amazon, iTunes, CDBaby, most music websites and http://www.jenniferdefrayne.com.

“Sisu” was a familiar word for DeFrayne, growing up in the Upper Peninsula of Michigan, one of the cradles of Finnish culture in the U.S. It is loosely defined as a unique quality characterizing the Finnish spirit…a mindset that enables an individual to reach beyond their present limitations, act against all odds and transform struggles into success. It is believed to be a universal capacity which we all share: Perseverance, Courage, Endurance, Determination, Grit, Fortitude, Bravery, Spirit, Resilience and Inner Strength.

DeFrayne’s life is a demonstration of sisu, as told more deeply in her biography. At the age of 5, she embarked on her journey as a self-taught pianist inspired by the wild beauty of the land around her, which is featured in her new Sisu music video. Despite many family heartbreaks and health challenges, she continued turning to the piano for solace, and in 2014, was named Best New Artist by Zone Music Reporter, when her debut album By A Wire (Little Hartley Music) was also nominated for Best Piano Album with Instrumentation.

Many artists release a critically-acclaimed debut album only to stumble a bit on the sophomore effort. Such is not the case for DeFrayne, according to earlier reviewers. While Sisu shows growth and change for DeFrayne, it also underscores the fact that the praise heaped on her first recording was a mere precursor to the artistry yet to come. Regarding the evolution of the 12 songs on the new album, Sisu, she says, "Each song on this album embraces the spirit of sisu in one way or another, and each song is meant to reflect the many characteristics of sisu."

To highlight a few tracks on the album, one begins with “Fire Island” a contemplative piece titled with an English translation of her strong Finnish maiden name “Palosaari.” The raw pouring out of emotion that DeFrayne invites the listener to witness is instantly engaging. The mood lightens on “Be Who You Are,” indicating the acceptance of the trials and tribulations that have riddled her life. By far, the most haunting and moving song on the album is its namesake “Sisu.” The artful layering of tones, moods, and instrumentation (piano, violin, bass guitar and Electronic Wind Instrument aka EWI) certainly earn this track the title of a masterpiece.

Her years of coping with personal grief, illness and recovery from a stroke at an early age, led Jennifer to want to heal others, too; this healing spirit is apparent in the peaceful song “Palo Santo.” The airiness of an EWI with gentle piano and vocalizations conveys a sense of calm and space. “Equanimity” feels like a deep breath in a trying time; conveying multiple emotions at once, DeFrayne engages soft vocals and English horn to portray strength and composure in the midst of a storm. “Perseverance” is Jennifer’s closing message to her listeners; it is melancholy wrapped in joy, with a touch of percussion added to an encouraging and hopeful soundscape.

In an early review, noted music writer Bill Binkelman stated "Jennifer DeFrayne's Sisu is not just better than her debut, which is already high praise, but it is a work of such emotional depth, technical artistry, and self-assuredness, that I am left wondering 'Where has this remarkable woman been all this time?' "

In 2017, Finland celebrates 100 Years of Independence with its Centennial, and the world will learn much about Finnish life, culture and traditions. Thanks to DeFrayne’s new album, many Americans will be ahead of the curve, having already learned the essence of sisu from her life and music.

Broadcast promotion for the album is handled by LAZZ Promotions, Ed & Stacey Bonk; contact via (905) 470-1230 or e-mail: lazzpromotions(at)rogers.com.

For review copies and interviews, please contact Beth Ann Hilton at The B Company / PR & Marketing, via (310) 560-8390 or e-mail: bethhilton(at)theBcompany.com.