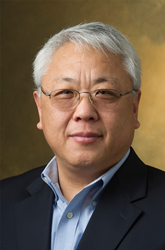 Dr. Lin’s research on how species of plants and mushrooms can be used as a means of cleaning contaminated soil has an immensely significant worldwide impact.

Lin is an environmental ecologist with special research interest in phytoremediation, a biotechnical process that utilizes plants for the cleanup of trace element contamination. His research lab at SIUE conducts original research in environmental biogeochemistry of selenium, with focus on biotransformation and volatilization of selenium in the environment.

“I am honored to have received this award,” said Lin. “Selenium is an essential nutrient element for humans and animals, but in excess, it can become an environmental toxicant. It is best known as an anti-oxidant and shows anti-carcinogenic properties. Selenium intake deficiency might have affected up to one billion people worldwide. My research lab at SIUE has made efforts to explore selenium biological transformation processes in the environment, and has integrated selenium phytoremediation with the development of selenium-enriched food products for people in selenium-deficient areas.”

Since joining the SIUE faculty in 2002, Lin has received a total of $293,912 in external research grant funding for work as a principal investigator (PI), and a total of $682,284 for projects on which he has served as a co-PI or participant. His research activities at the University have been supported by major federal funding agencies including the National Science Foundation, National Institutes of Health, Department of Energy and the Environmental Protection Agency.

“Dr. Lin’s research on how species of plants and mushrooms can be used as a means of cleaning contaminated soil has an immensely significant worldwide impact,” said Jerry Weinberg, PhD, associate provost for research and dean of the SIUE Graduate School. “Natural approaches like this will save billions of dollars in pollution clean-up, and importantly, give countries that do not have the funds for pollution clean-up a practical means for making their environments safe to live in. Dr. Lin is certainly a deserving SIUE Distinguished Research Professor.”

Since his arrival at SIUE, Lin has co-edited seven books, published 30 peer-reviewed book chapters and contributed to 44 research articles in peer-reviewed scientific journals, 30 of which were co-authored by his students. Additionally, he recently co-edited “Development and Uses of Biofortified Agricultural Products,” the first book published on the subject of biofortification in the world.

“In addition to benefitting SIUE and its students, Dr. Lin’s work offers broad societal benefits,” said Elizabeth Pilon-Smits, PhD, professor of plant physiology at Colorado State University, in her recommendation letter. “Elucidating the mechanisms by which plants or fungi metabolize and accumulate or volatilize selenium and other trace elements, along with the development and optimization of remediation and biofortification technologies, is of great importance for the health of humans, livestock, wildlife and the overall environment.”

“Dr. Lin is one of this institution’s most prolific scholars,” agreed Vance McCraken, PhD, chair of the Department of Biological Sciences, and Nicholas Guehlstorf, PhD, chair of the Department of Environmental Sciences, in a joint letter of support. “He has developed an exceptional international reputation and has connected his work at SIUE with collaborators around the world. Since his promotion to professor, Dr. Lin has maintained the almost aggressive pace of research that he brought to SIUE as an assistant and associate professor, while also succeeding in his roles of teacher, mentor, colleague and administrator.”

Lin earned a bachelor’s in environmental biology at Liaoning University in China and a master’s in ecology at the Chinese Academy of Sciences. He went on to earn his doctorate at McGill University in Canada in 1996, and later was a postdoctoral research fellow at the University of California at Berkeley.

By preparing the next generation of leaders in a knowledge-based economy, SIUE’s Graduate School fulfills the region’s demand for highly trained professionals. Graduate school offerings include arts and sciences, business, education, engineering, nursing and interdisciplinary opportunities. SIUE professors provide students with a unique integration of theoretical education and hands-on research experiences. Students can obtain graduate certificates or pursue master’s degrees, and be part of a supportive learning and rich intellectual environment that is tailored to the needs of adult learners. The Graduate School raises the visibility of research at SIUE, which ranks highest among its Illinois Board of Higher Education peers in total research and development expenditures according to the National Science Foundation. Doctoral programs are available in the Schools of Education (EdD) and Nursing (DNP). The School of Engineering and the Department of Historical Studies feature cooperative doctoral programs (PhD), and the College of Arts and Sciences features an Environmental Resources and Policy cooperative PhD.