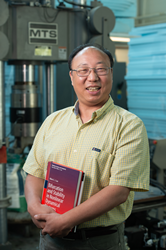 "The online format saved people both time and cost, while still achieving our goals of research communication and international networking."

Held in late November, the virtual conference series presented an opportunity for acclaimed researchers like Luo to present on fundamental and frontier theories and techniques for modern science and technology, stimulate research interest, and share new knowledge with the next generation of researchers, engineers and technologists.

According to Luo, among the positives of the online format was attendees’ ability to access presentations as convenient in various time zones.

“The conference organization committee shared the videos on YouTube, which accommodated the time zones of local symposium organizers,” Luo explained. “Participants liked the conference style, as they could efficiently discuss problems to resolve their puzzles in research. The online format saved people both time and cost, while still achieving our goals of research communication and international networking. Two groups of scientists from Portugal and Greece have since indicated their interest in organizing the next conference on Nonlinear Dynamics and Complexity.”

“If the similar method is applied in disease pandemic modeling, one may accurately know the development of disease pandemic evolutions,” he added. “Such new results will help smart city and artificial intelligence to develop more efficient algorithms.”

Awards were granted to five scientists for their contributions in nonlinear science complexity:

For more information on the conference, visit ndc.lhscientificpublishing.com.