Six award-winning conductors will lead the National Association for Music Education’s (NAfME) premier All-National Honor Ensembles (ANHE) in Orlando, Florida. NAfME is pleased to announce the return of both the Modern Band and Guitar Ensembles to the ANHE program. The nation’s top high school musicians will audition for the opportunity to rehearse and perform in a one-of-a-kind national music honors program. 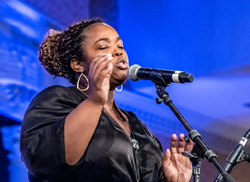 The nation’s top high school musicians will audition for the opportunity to rehearse and perform int he All-National Honor Ensembles which include a concert band, symphony orchestra, mixed choir, jazz ensemble, guitar ensemble, and modern band ensemble, now in its second year.

This year, six award-winning conductors will lead the National Association for Music Education’s (NAfME) premier All-National Honor Ensembles (ANHE) in Orlando, Florida. NAfME is pleased to announce the return of both the Modern Band and Guitar Ensembles to the ANHE program.

The nation’s top high school musicians will audition for the opportunity to rehearse and perform in a one-of-a-kind national music honors program. The students must first compete at their local, district, and state level to become eligible for this distinguished honor. On November 5–8, these exceptional musicians will gather at Gaylord Palms Resort & Convention Center in Orlando to showcase their expert musicianship and perform a gala concert celebrating music education and the arts.

The All-National Honor Ensembles consist of a concert band, symphony orchestra, mixed choir, jazz ensemble, guitar ensemble, and modern band ensemble, now in its second year. The concert band and symphony orchestra will each have approximately 120 instrumentalists, the jazz ensemble 20 instrumentalists, the mixed choir approximately 240 vocalists, the guitar ensemble 60 guitarists, and the modern band ensemble 20 musicians. Eligible students have qualified for their state-level honor ensemble program and competed against top students for a spot in these national honor ensembles. As many states do not have an All-State Guitar Ensemble, students who participate in their school’s guitar ensemble program are permitted to apply for the All-National Guitar Ensemble. Similarly, as many schools do not have modern band ensembles, students are permitted to apply for All-National Modern Band if they are sponsored by a NAfME member. The audition deadline is May 1, 2020, at 11:59 PM Eastern time.

Ensemble members will perform under the direction of six of the most prominent conductors in the United States.

Rodney Dorsey, Professor of Music at the Indiana University Jacobs School of Music, will lead the 2020 All-National Concert Band. Dorsey is the conductor of the internationally recognized Indiana Wind Ensemble and guides all aspects of the graduate wind conducting program. Past positions have included Director of Bands at the University of Oregon, Associate Director of Bands at the University of Michigan, Associate Professor of Music at DePaul University, and Director of Athletic Bands at Northwestern University’s Bienen School of Music. Dorsey also taught public school for eight years in Florida and Georgia. He is an active guest conductor having led intercollegiate, all-state, and regional honors bands around the country. International engagements include Hungary, Canada and Bulgaria. An active advocate for the composition of new wind repertoire, Dorsey has been involved in a number of commissioning projects that include the following composers; Andrea Reinkemeyer, Steven Mackey, D. J. Sparr, Anthony Barfield, Stacy Garrop, Andrew Rindfleisch, and John Mackey. Read more about Rodney Dorsey.

Nobuyoshi Yasuda, Orchestra Director at the University of Wisconsin-Eau Claire and Music Director of the Chippewa Valley Symphony, will lead the 2020 All-National Symphony Orchestra. He guest conducted orchestras such as the Muncie Symphony Orchestra, the Fort Wayne Philharmonic, La Crosse Symphony, and the St. Paul Chamber Orchestra. With the St. Paul Chamber Orchestra, he has participated in the educational outreach project, “Arts across Minnesota” granted by the Minnesota State Arts Board, to have residency in a high school; he led a ‘side by side rehearsal’ and gave a concert. Yasuda’s contagious enthusiasm and dedication to education has made him an icon of music in Eau Claire and surrounding communities. His expertise and joyful approach to music that allows him to work successfully with the musicians of the Chippewa Valley Symphony, Grand Teton Music Festival, and St. Paul Chamber Orchestra has allowed him to reach out to aspiring young musicians as well. Read more about Nobuyoshi Yasuda.

Frances Fonza is the Director of Worship and Arts at Mt. Ennon Baptist Church in Clinton, Maryland, and teaches at Duke Ellington School of the Arts in Washington, DC. She will lead the 2020 All-National Mixed Choir. Fonza taught choral music at the middle school and high school levels in Kentucky for several years. Additionally, she served as Assistant Professor of Music Education and Director of Choral Activities at Wittenberg University in Springfield, Ohio. Her responsibilities included teaching music education courses, aural skills, choral conducting, supervising music education interns, and directing the Wittenberg choirs. Choirs under her direction have participated in state, regional, and national music festivals. Fonza is an active singer, clinician, and adjudicator. A frequent guest conductor, she has conducted several honor, public school, and church choirs. Read more about Frances Fonza.

Todd Stoll will lead the 2020 All-National Jazz Ensemble. Stoll has taught young musicians at every level, from elementary school through college. His impact on public music education can be seen in his legacy at central Ohio’s Westerville City Schools, where he served for 18 years as music teacher and for 10 years as music curriculum coordinator. He has also served as Ohio’s president of the International Association of Jazz Educators and the inaugural chair of jazz events for the Ohio Music Education Association. In 2011, Stoll became the Vice President of Education at Jazz at Lincoln Center (JALC) in New York City, which continues to afford him the opportunity to bring jazz education programs to thousands of people of all ages and socioeconomic levels. Since he joined the organization, JALC has produced more than 10,000 education events in the United States and around the world. Stoll holds a Master of Music degree from the University of Cincinnati College-Conservatory of Music and a Bachelor of Music degree from Miami University. He currently serves on the boards of the Jazz Education Network where he is President; the New York City chapter of Most Valuable Kids; and the NAfME Music Education Policy Roundtable. Read more about Todd Stoll.

Chuck Hulihan, Assistant Department Chair for Performing Arts at Glendale Community College (GCC), will lead the 2020 All-National Guitar Ensemble. Hulihan has enjoyed a career over the past three decades as a guitarist, educator, conductor, narrator, arts administrator, and as a classical music radio host. His work as a conductor has included more than 120 concerts directing the GCC Guitar Ensembles and includes leading large orchestras comprising students from high school, college, and guitar society ensembles. He is the Director of the Guitar Foundation of America’s Youth Guitar Orchestra, Community Guitar Orchestra, and Guitar Summit. He contributes to the field of music education as a conference clinician and presenter and serves as Western Division Representative for the National Association for Music Education’s Innovations Council, as ex-officio Guitar Chair for the Arizona Music Educators Association, and as an active board member of the Grand Canyon and Phoenix Guitar Societies. Read more about Chuck Hulihan.

Tony Sauza is the Los Angeles County Regional Program Director, where he supports teachers in developing their Modern Band programs across the Southern California area. Sauza will lead the 2020 All-National Honor Modern Band. Before joining the staff of Little Kids Rock, he taught secondary music in Los Angeles for eight years. Sauza received his bachelor’s degree from UCLA in Ethnomusicology while minoring in Chicana/o Studies. He then earned his California Single Subject Teaching Credential in Music in 2010 and his masters degree in Afro-Latin Music from California State University Los Angeles in 2012. Sauza is a multi-instrumentalist and has been playing guitar for more than twenty years. He currently performs locally and nationally with his cumbia project, Viento Callejero, along with guest appearances and collaborations with international artists. Read more about Tony Sauza.

Read more about the NAfME 2020 All-National Honor Ensembles, guest conductor biographies, and how students may audition by visiting: nafme.org/ANHE and follow #ANHE2020.

National Association for Music Education, among the world’s largest arts education organizations, is the only association that addresses all aspects of music education. NAfME advocates at the local, state, and national levels; provides resources for teachers, parents, and administrators; hosts professional development events; and offers a variety of opportunities for students and teachers. The Association has supported music educators at all teaching levels for more than a century. With more than 60,000 members teaching millions of students nationwide, the organization is the national voice for music education in the United States.