Yamaha will bring champion musicians to Anaheim and Hollywood to attend NAMM as expert clinicians, then perform and record with Ritenour. 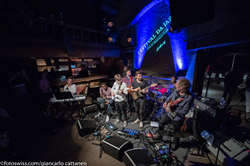 “We’re excited for the competition winners’ big trip to Los Angeles and all the amazing performing and recording opportunities that lie ahead,” said Sharleen Bazeghi, production manager for the Six String Theory Competition.

Eight winners of the Six String Theory Competition, hosted by Grammy®-winning guitarist and producer Lee Ritenour and sponsored by Yamaha, will be joining Ritenour this month as clinicians at the Winter NAMM Show in Anaheim, followed by a special club performance and professional recording session in Hollywood.

Lee Ritenour’s Six String Theory Competition is an official non-profit organization with the mission of supporting aspiring musicians towards a professional music career through scholarships, recording, performing, mentoring and prizes. The biennial competition accepts performer applications for guitar, bass, piano/keyboards and drums, and offers winners performance opportunities and scholarships, as well as prizes from sponsors. Yamaha supports the competition with its contribution to a prize package worth approximately $15,000.00.

After extensive review by Ritenour and dozens of advisory judges – including Yamaha Artists Nathan East, John Patitucci, Dave Weckl and Patrice Rushen – the following nine 2018 winners were chosen and announced in June (genres and instruments in parentheses):

(Jayne will not be joining Ritenour and his fellow winners in Los Angeles, although he was a part of their July performance in St. Moritz, Switzerland and will rejoin them in March in Tokyo.)

The winners will be flown by Yamaha to the Winter NAMM show, set to take place January 24-27, 2019, at the Marriott Hotel in Anaheim. There they will be acting as clinicians, and also performing on the Yamaha stage and in the company’s booth in the hotel’s Marquis Ballroom. On Monday, January 28, the group will perform at Catalina Jazz Club in Hollywood, where Ritenour will perform a few songs together with the winners; afterward they will take the spotlight as a group, and some individually.

Finally, the group will have a recording session at the legendary Sunset Sound studio in Hollywood. The recording was originally scheduled to take place at Woodshed Recording Studio in Malibu, which was lost in the recent wildfires that swept the region; Sunset Sound is generously donating their studio time to ensure the session proceeds as planned. Rehearsals for the session were intended to be at Ritenour’s home studio in Malibu, which was also consumed in the wildfires; a new rehearsal space was found at Studio Instrument Rentals in Hollywood.

“Even as Lee and the rest of us recover from the fires, the spirit stays strong,” said Sharleen Bazeghi, production manager for the Six String Theory Competition. “We’re excited for the competition winners’ big trip to Los Angeles and all the amazing performing and recording opportunities that lie ahead.”