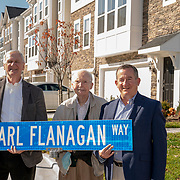 The Christopher Companies have dedicated a street name in honor of former Mt. Vernon Planning Commissioner, Earl Flanagan. Earl Flanagan Way is located off of Skyview Drive in Alexandria, Virginia, and serves as a median between townhomes under construction at the community of Skyview Towns near Ft. Belvoir in Alexandria, VA. This tribute recognizes Mr. Flanagan’s extraordinary life of service over decades, both locally and abroad during the Second World War.

Mr. Flanagan said the naming of a street after him was unexpected but he was thankful. Asked what his fondest memory of his time as Planning Commissioner was, he said, “Requesting that part of Occoquan rock quarry be used as a water resource for Fairfax County.”

Mr. Flanagan’s remarks belie his own humility. In 2014, as the Mount Vernon district entered a transformational era, the Planning Commission, with Flanagan at the helm, converted the Vulcan Rock Quarry to a local water reservoir for use by the metropolitan area.

“It was actually incredibly forward thinking,” said Mark Viani, President of the Southeast Fairfax Development Corporation. “With climate change and the very real possibility of insufficient supply from the Potomac during drought conditions, this was intended as an emergency water supply for the County in case of water rationing.”

Well known locally as someone who helped shaped the Mount Vernon District and Fairfax County, there is much more to the Mr. Flanagan’s story. Said Viani: “You’d never know it from talking to Earl, but he’s had an amazing life. He was part of the 71st Infantry Division that was sent into Europe and was among the troops that liberated the Mauthausen concentration camp.”

Viani was with Flanagan in 2018 when he visited the United States Holocaust Museum for a screening of the film Prosecuting Evil, and there met and shook hands with Ben Ferencz, the chief prosecutor for the United States Army at the Einsatzgruppen Trial, one of the 12 military trials held by U.S. authorities at Nuremberg, Germany. At the 2018 event, Flanagan wore his old Army jacket, perfectly preserved and which still fit. Throughout his life, Flanagan kept in touch with some of the survivors he helped liberate from Mauthausen.

Flanagan received his bachelor’s degree in architectural engineering from the University of Illinois and attended Georgetown University’s School of Foreign Service, earning a graduate degree in social psychology and political science. In addition to serving as a non-commissioned officer during World War II, and receiving the Army Commendation Medal for an advance landing in France, he later served as a psychological warfare officer and airbase commandant in the United States Air Force during the Korean War.

In the late 1960s, having established an Illinois-based architectural firm, Flanagan joined the Chicago Regional Office of Housing and Urban Development as an expert on state and local building regulations. In 1974, he became a principal architect and advisor on building codes and administration for the United States Department of Housing and Urban Development (HUD); he later served as a HUD advisor to the governments of Japan, China, Lebanon, and Mexico, as well as many institutes and organizations. During his time with HUD, Flanagan received the Certificate of Merit, the Department’s highest award; he also helped establish and served as the first president of the Office of Affordable Housing. Locally in Virginia – until his retirement and beyond – Flanagan is known for his unflagging community involvement and tireless efforts to responsibly help develop the region.

“There’s been dramatic change in the Mount Vernon District and Fairfax County, and Earl’s played a key role in all of it, and particularly assembling the institutions that help us run the district,” said Viani. “He’s also just a very nice guy, well loved by all who know him and all that he’s done.”

Dick Labbe from Eastwood Properties, the company instrumental in assembling and rezoning the original Skyview Park, and that culminated with this last addition of Skyview Towns, emphasized how time-consuming a planning commissioner's job can be: "It's not simply a couple public hearings a month, but includes many outside meetings with land use committees, HOA's, neighborhood discussions, etc. Earl was always there to make sure the entire land use process was followed, understood, and everyone treated fairly. When John Regan, the CEO of Christopher Companies, suggested the street name for this development, it made perfect sense."

Earl Flanagan Way will stand as a lasting tribute to the man, his decades of service and friendship to the community, and contributions toward humanity at large.

Note: There are three new homes remaining for sale at Skyview Towns; for more information, contact: Liz Walker 571.512.2195 or visit us at http://www.christophercompanies.com.