SLCC Board of Trustees Elects Community Leaders to New Leadership

New SLCC Board of Trustees leaders have a history of making significant contributions to the college. 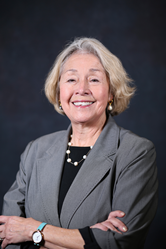 We are thrilled to have Maria and Jim leading the college’s board of trustees.

Maria S. Farrington and Jim M. Wall have been selected to serve as chair and vice chair of the Salt Lake Community College Board of Trustees.

Farrington is a community leader with more than 24 years of experience in local not-for-profit organizations and schools. She currently owns a non-profit consulting business, and she is a former executive director for Holy Cross Ministries. She has also held leadership positions at the Discovery Gateway Children’s Museum in Salt Lake City, the United Way of Salt Lake and the Eccles Annenberg Initiative at the Salt Lake City School District. Farrington was appointed to the SLCC Board of Trustees in 2015 and was elected as the board’s vice chair in 2017. She also represents the SLCC Trustees on the SLCC Foundation Board, where she has championed many fundraising activities for the college.

Wall worked as publisher of the Deseret News Publishing Company, Inc. and as director of the Bonneville International Corporation from 2000 until 2010. Previous to his work at the Deseret News, he was the executive vice president and general manager of The Denver Post. Wall has been active in each of the communities where he has lived and has worked with the United Way, local chambers of commerce, community and economic development organizations, college boards, the Boy Scouts of America and local theater, opera and symphony boards. He has served on the SLCC Board of Trustees since 2015.

“We are thrilled to have Maria and Jim leading the college’s board of trustees,” said Dr. Deneece G. Huftalin, president of SLCC. “Both have made significant contributions to our institution for years by providing guidance and leadership in various college initiatives. We look forward to continuing to work with them to increase access, enrollment and completion at SLCC.”