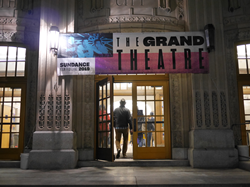 The community and our students have access to what has truly become an international arts and cultural phenomenon.

The 2020 Sundance Film Festival will screen 19 films at Salt Lake Community College’s Grand Theatre, Jan. 24-Feb. 2, during the event’s opening and closing weekends. This is the sixth year the Grand will host film enthusiasts from around the world during the annual festival.

The schedule of movies at the Grand features 11 premiere category films including “Tesla,” with Ethan Hawke and Kyle MacLachlan, “Downhill,” with Julia Louis-Dreyfus and Will Ferrell, “Four Good Days,” starring Glen Close and Mila Kunis, and the Salt Lake City premiere of the Taylor Swift documentary “Miss Americana.”

“Sundance has become more than a film festival, it’s a Utah tradition and The Grand is proud to be a part of that tradition,” said Seth Miller, artistic and executive director of The Grand Theatre. “The community and our students have access to what has truly become an international arts and cultural phenomenon.”

The $300 Grand Theatre Pass gives film enthusiasts access to all screenings at the theater on Fridays, Saturdays and Sundays during the festival. The pass also provides entry to all of the festival’s non-screening venues, such as Sundance’s headquarters and the Sundance ASCAP Café in Park City. For more information on purchasing a Grand Theatre Pass and individual tickets, visit sundance.org. The Grand Theatre is located at SLCC’s South City Campus, 1575 S. State St., Salt Lake City.

The Grand Theatre is a 1,100-seat venue located at Salt Lake Community College’s historic South City Campus, home of the innovative and state-of-the-art Center for Arts and Media in Salt Lake City. The theatre dates back to the 1930s and combines Depression-era charm with the latest technology in lighting and sound. Every season the Grand is host to popular concerts, dance performances and award-winning theatre productions that attract arts enthusiasts from all along the Wasatch Front.