Clairica Lange, a Slidell mother of three has been crowned Mrs. Louisiana Universal, and she says she has already launched her platform, celebrating fathers with her new foundation, Standing Tall as Nurturing Dads, or S.T.A.N.D. 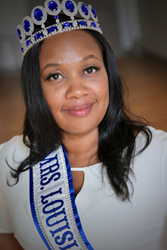 On a whim, Clairica Lange asked her teenaged daughter if she would ever be interested in being in a beauty pageant. The younger Lange quickly said no, but instead of being discouraged, the married mother of three children said, “Okay, I’ll just do it myself.”

Inspired by another New Orleans resident, Ms. Louisiana Universal 2018 Havilah Malone, the Memphis, Tennessee native who now lives in Slidell, La., began researching and applied for the Universal Pageant. Before she knew it, she had been appointed to represent Louisiana in the married division.

As Mrs. Louisiana Universal, Lange has remained true to her platform, including participating in homeless relief and sending toiletry items to Hurricane Florence survivors. Her next order of business is promoting Standing Tall as Nurturing Dads, S.T.A.N.D., which was inspired by her husband, Stan Lange, and will celebrate fathers who have healthy relationships with not only their own children, but the children in their communities. She plans to kick off the foundation with a pancakes and pajamas breakfast, scheduled to take place later this fall.

“My husband is a wonderful role model,” she said. “I love to watch him be a Dad, uncle, mentor, advisor, and friend to the youth. Every child should have a positive male role model in their life.”

Lange, an actress and associate publicist at Meet the World Image Solutions, LLC, a publicity and literary services firm in New Orleans, will compete in the Mrs. Universal pageant Aug. 1-8, 2019 in Playa del Carmen, Mexico. Voted one of the top four pageants for married women and one of the top eight pageants for mothers, the Universal Pageant prides itself as an organization with integrity, values, and resilience. In 2018, contestants served more than 7,500 hours of volunteer hours.

For more information on the Mrs. Louisiana Universal Pageant, visit http://www.mrsuniversal.org/, or contact Lange at mrslouisianauniversal2019(at)yahoo(dot)com.