In our over-connected world, show inspirits listeners to tap the brakes, slow down and get back to living real. 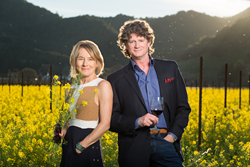 We owe ourselves time to unplug, slow down and get back to living real.

Slow Living Radio, a one-hour weekly Napa Valley-based lifestyle radio program broadcast on the national CRN Digital Talk Radio Network, was honored as an inductee into the Taste Hall of Fame at the 7th Annual Taste Awards held on February 11, 2016 in San Francisco.

TASTE HALL OF FAME Inductees are selected based on having received numerous TASTE Awards or finalist nominations over the years, and having made a significant impact in the world of taste and broadcast entertainment. Inductees range from television and movies, to online video, radio, and real world experiences. The Taste Hall of Fame mission is to recognize and acknowledge outstanding excellence in video, film, mobile and interactive content focused on food, drink, fashion, design, travel and lifestyle.

Hosted by travel industry veteran Steve Andrews, and international award-winning Australian Author and Chef Sally James, Slow Living Radio is in its 6th broadcast year. In our over-connected world, Slow Living Radio inspirits listeners to tap the brakes, slow down and get back to living more real and in the moment.

Through a broader lens focused on more mindful living, the show seeks to inspire listeners through the passions, pursuits and stories of its guests, presenting topics ranging from food, wine, travel and health to greener living, the environment and entertainment - all in the context of bringing their audience "back to real life". Slow Living Radio is broadcast live from Napa Valley on Mondays from 7-8pm (PT) on the national CRN Affiliate Network at CRNTalk.com.

“We are truly humbled by this honor,” said producer Sally James. “Our mission is to provide a way for our guests to share their passion through their own unique stories, and it is our guests who have helped to mold the show into what it is today. We are grateful to them, to our listeners, to the team at the CRN Network for their continued support, and to the Taste Awards for this wonderful acknowledgement.”

About the TASTE Awards
The Annual TASTE AWARDS are the original awards for the Lifestyle Entertainment Industry. Also known as the Tasty Awards, they are the premier broadcast awards show celebrating the year’s best achievements in Food, Fashion, Home and Lifestyle programs on Television, in Film, Online, on Radio and at Live Interactive Events. Visit TheTasteAwards.com.