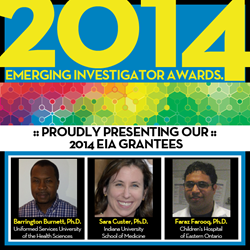 Our goal was to bolster the existing SMA research landscape by ensuring that emerging talent and fresh approaches are encouraged and supported.

The awards, conceived jointly by the two organizations, are designed to draw strong, innovative talent into SMA research, according to FightSMA Chair Mike Calise. The winners were chosen from a field of promising young investigators ranging from recent PhD graduates engaged in post-doctoral fellowships up to assistant professors within the first two years of their appointment.

“We’re excited to make these awards for a second year,” said Bill Strong, co-founder of the Gwendolyn Strong Foundation. “Our goal was to bolster the existing SMA research landscape by ensuring that emerging talent and fresh approaches are encouraged and supported, and we continue to be inspired by the quality of grant applications received from major SMA research institutions.”

The three winners were announced at the annual FightSMA research conference held April 10-11, 2014 in Washington, D.C., each of whom will receive a $27,500 award. They are:

FightSMA (http://www.fightsma.org ) is a 23-year-old nonprofit organization dedicated to finding a treatment for spinal muscular atrophy (SMA), the leading genetic cause of infant death. The group has awarded research grants at more than 40 universities and research institutions in the United States, Canada, the United Kingdom, France, and Italy.

The Gwendolyn Strong Foundation (http://www.thegsf.org) is an all-volunteer, nonprofit organization dedicated to increasing global awareness of spinal muscular atrophy (SMA), accelerating research, and supporting families impacted by SMA and other life-altering conditions. The GSF motto: “NEVER GIVE UP.”