Founded in 2006, Smallworks Press is an independent publishing company located in Las Vegas, Nevada, that specializes in fine art and culture publications, with a commitment to the highest standard in design, quality and production. With more than 100 years of collective experience, the Smallworks Press team enjoys collaborating with a wide-spectrum of authors to create publications, with spectacular illustrations and photography, inspiring and thought-provoking essays, with an attention to detail rarely found in publishing today. 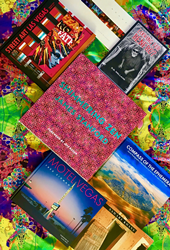 “The temptation is always to think of Las Vegas as a gambling mecca, the ‘Entertainment Capital of the World’. Well, it’s that. But, it’s a lot more than that as well."― James Stanford

Since its founding 114 years ago, Las Vegas has grown from a dusty railroad water stop between Salt Lake City and Los Angeles to a major desert metropolis. Home to over 2 million people in the greater metropolitan area, this vibrant city has become the worlds entertainment capital. Not just the city host the most resort casinos concentrated in one area, but its also hosts world renowned shows, sporting events and has one of the fastest growing cultural arts scene in the region.

Thanks to its rapidly expanding arts scene Las Vegas now is home to the Smith Center for the Performing Arts, The National Museum of Organized Crime and Law Enforcement, also known as the MOB Museum, The Neon Museum, the National Atomic Testing Museum and dozens of arts related non-profits and world renowned private art collections. Though Las Vegas has always had a cultural arts scene its development today is thanks to a dedicated cohort of arts enthusiasts and supporters that have added to the community's cultural narrative.

Founded by James Stanford, a Las Vegas native, artist, entrepreneur and stalwart supporter of the cultural arts, Smallworks Press was created to publish fine books on the subjects of fine art, culture, poetry and Zen Buddhism. These publications greatly enhance the city's cultural offerings in a beautiful and tangible way for people around the world to better understand Las Vegas and the people who call this city home.