Parker will support IoTeX in developing next-gen smart devices with fantastic user experience as well as unparalleled security and privacy. 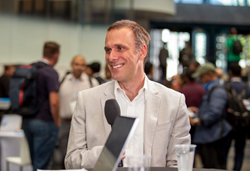 "I firmly believe that the next important evolution for IoT will be centered around privacy and self-sovereignty."

Robert Parker, an Internet of Things (IoT) pioneer and former executive at Samsung, Amazon, and Microsoft, has joined the advisory board of IoTeX, a Silicon Valley-based technology platform for privacy-protecting smart devices with a vision for an Internet of Trusted Things.

Parker is an industry-awarded and recognized technical IoT leader that holds more than 20 patents of his own. In his new role on the IoTeX advisory board, Robert will help expedite the growth of the IoTeX ecosystem and meet the growing demand for secure, convenient devices that protect users’ privacy.

As CTO of Samsung SmartThings, Parker led the company’s product and engineering teams, overseeing hardware and software development with the goal of connecting disparate smart devices from lights to TVs to security cameras. Prior to joining Samsung, he served as the Director of Engineering at Amazon, spending five years working on the company’s top projects, including: Alexa, Fire TV and Prime Music. Before that, he spent 18 years as a General Manager at Microsoft.

“I have seen how the smart devices space has progressed these last few decades and firmly believe that the next important evolution for IoT will be centered around privacy and self-sovereignty,” Parker said. “I am excited to work with a company like IoTeX that is positioned as a first-mover to lead the industry to a new future where user privacy is paramount.”

IoTeX is a blockchain-based platform that is empowering a global ecosystem of products with privacy and data-ownership as first principles. The IoTeX platform currently powers an array of “own your data” smart devices for both consumers and developers, such as the Ucam home security camera and Pebble asset tracking device. The IoTeX platform is designed to be open, resilient, and transparent, combining tamper-proof hardware and tamper-proof software to unleash a future where everyday people and businesses are in control of their devices and data.

“We are honored to welcome Robert, whose appointment validates the company’s vision for a privacy-centric Internet of Trusted Things,” said IoTeX Cofounder Raullen Chai. “Robert’s broad experience in the technology space and deep expertise in IoT will help IoTeX in our mission to enable solutions that have the user experience that users expect while also providing unparalleled security and privacy.”

Robert Parker and Raullen Chai are available for interviews.

About IoTeX:
Founded as an open source platform in 2017, IoTeX is building the Internet of Trusted Things, where all physical and virtual “things” — humans, machines, businesses, and DApps — can exchange information and value at global scale. Backed by a global team of 30+ research scientists and engineers, IoTeX combines blockchain, secure hardware, and decentralized identity innovations to empower intelligent IoT networks and machine economies. By serving as a decentralized trust fabric for IoT, IoTeX will empower the future decentralized economy by “connecting the physical and digital worlds, block by block”.