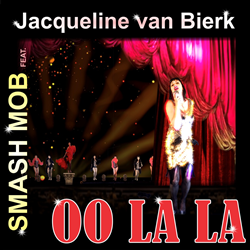 Bringing back the 1920's for the 'Oo La La' short film/music video took two years of editing/postproduction (and two burned up IMac's).

A newsboy sneaks into a 1920’s grand burlesque nightclub and hijinks ensue - so goes the plot of the new Smash Mob music video/short film “Oo La La” featuring Jacqueline van Bierk. Those experiencing the ambitious scale of this music video/short film might be shocked to find out it was shot in a tiny garage studio--on iPhones! Smash Mob is the teaming of a veteran performer, songwriter, producer, award-winning filmmaker/screenwriter, Frank Rogala (lead vocalist for EXUDE and NC-17) and performer, songwriter, multi-instrumentalist, composer, Jason Eldridge.

“I’ve done so much with so little for so long that now I can do practically anything with nothing,” joked director, co-producer/composer/editor Rogala.

“Post-production took over two years. I literally burned up 2 IMac’‘s editing this,” explained director/co-writer/producer Rogala. “Finally after driving back and forth to Apple stores for repairs (logging over 2000 miles) Apple just replaced the computers. Imagine editing 25 layers of 4k video in dozens of scenes and you might understand how difficult this was on what essentially is a home computer. Every tiny change I made meant a half-hour or more of waiting for a render - to see if it worked.”

Professional choreography was provided by Madam Sunset Lovleigh who brought authentic burlesque costumes and worked with van Bierk. Lovleigh appears as a fan dancer in the film/music video. "I made liberal use of my neighbors and housemates," explained Rogala. "Aaron King, an Emmy winning art director, lives next door. Aaron has asked me again and again, ‘Why haven’t we worked together?’ I always explained, ‘you get paid and have a budget - I have NO budget!’' When I realized that his teenage son, Konrad, would be perfect as the 'newsboy' things started rolling. Things sped up when it occurred to us that we were one growth spurt away from losing our window of opportunity with Konrad. I was right, it’s been a year since we shot his scenes--Konrad has grown nearly 8 inches,” laughed Rogala.

Rogala was permitted to use King’s account at Western Costume and History for Hire (places where movie studios get their props and costumes). “I didn’t have much to spend, so we used strategies like - one suit had to fit all the guys,” said Rogala. “Aaron had a trunk of clothing he had inherited from his great grandmother. The antique dresses fit his wife, Monika, so she wears many of those outfits and appears as 5 different characters.”

Rogala’s previous Smash Mob video, You Can Run (a Westworld take off), was an official selection of the International iPhone Film Festival.

“I had no idea this was what Frank had in mind when we got started. I think it kind of picked up momentum and scale as we went along. I adore how amazing it came out. My dream is for this song to become a staple for modern-day burlesque and drag performers,” explained van Bierk.

“Jacqueline (van Bierk) is a bit of a superhero to us. As a child, she escaped over the wall from East Germany. They shoot you for that!” explained Smash Mob’s Jason Eldridge (a co-writer on the song). “To know her is to be impressed by her.”

Jacqueline van Bierk’s performance is pitch-perfect as the songstress who tempts nearly everyone with her seductive charms. Lead vocalist for Otto’s Daughter, van Bierk is also a composer for film and TV. “We jump at any opportunity to work with Jacqueline. Her voice is one of a kind, and if that wasn’t enough when you get her on camera-- she becomes bigger than life. She absolutely transforms,” enthused Rogala.

The Oo La La music video can be seen on the “Smash Mob Music” channel on Youtube or on the Smash Mob’s Facebook page. Smash Mobs Oo La La can be heard on Apple Music, Spotify, Itunes, Amazon, Google Play, Deezer -- everywhere music is available. To keep up with the latest Smash Mob news check out SmashMobMusic.com

Photos, music, music videos and resources for press for this release are located at: