So Manly, So Foolhardy - New Study Looks at the Role of Male Bravado in Recklessness

What would you do if someone called you a coward? Would you do something daring to prove them wrong? Researchers at PsychTests.com examine the risk-taking behaviors of men who feel the need to prove their manliness. 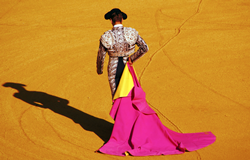 Some men will go to great lengths to prove their courage and masculinity, even it means taking reckless or dangerous risks.

Whether it’s jumping over a canyon in a rocket-powered motorcycle, running with the bulls, or taking a selfie while leaning out of a fast-moving train, people will do insanely risky things to prove their bravery and to get likes - and the majority of these daredevils tend to be men. So why take a risk that could prove fatal? Recent research from Psychtests.com indicates that hubris and the desire to prove one’s manliness can compel some men to take thoughtless and reckless chances.

Analyzing data from 4,945 people who took the Accident Proneness Test, PsychTests’ researchers singled out two distinct groups: men who take risks in order to prove their toughness and manliness (“Challengers”) and men who don’t (“Non-Challengers”).

“Research has consistently shown that men, especially younger age groups, are more likely to take reckless, sometimes foolish risks. Part of it is for the thrill, of course, as any stuntman or daredevil will tell you. However, ego, pride, and a desire to prove one’s manliness are factors that also play a role,” explains Dr. Ilona Jerabek, president of PsychTests. “In fact, among the men in the Challenger group, 87% said that they would do something daring if they were accused of being a coward, and 76% said that they make decisions based on how tough it will make them appear. The most shocking and, frankly, saddening statistic, was the fact that 74% of the Challenger men believe asking for help is a sign of weakness.”

“The question is, why go to such great lengths to prove their manliness? Because many of these men have been taught from a young age that it is inappropriate to show fear, vulnerability, or sadness; that crying or displaying any other emotion aside from anger is effeminate. So, these men find themselves having to do reckless and dangerous things to prove to others, but mostly to themselves, that they are ‘real men’,” concludes Dr. Jerabek.

Want to assess your accident proneness? Check out the Accident Proneness Test at https://testyourself.psychtests.com/testid/2448

How far would you go to prove your masculinity?Here’s how ego and beliefs about masculinity play a role in risk-taking: