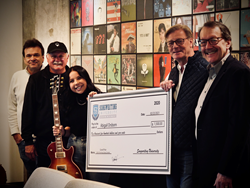 The three powerhouse organizations joined forces to not only discover the next generation of songwriters, but to provide critically-needed support for cancer patients, families, and research. Five dollars of every contest entry supported the work of the Scott Hamilton CARES Foundation, founded by Olympic gold medalist and cancer survivor Scott Hamilton. His foundation is dedicated to funding advanced, innovative research that treats the cancer and spares the patient. ﻿The grand prize winner received a Gibson Les Paul guitar, courtesy of Gibson Gives.

Songwriting University, whose unique services and world-class staff have been profiled in "Forbes Magazine," among other media outlets, provided a distinguished panel of songwriters, artists, producers, and music professionals, including award-winning songwriters Buddy Greene ("Mary Did You Know") and Wayne Kirkpatrick ("Change the World"), along with trail-blazing music industry manager and record executive Michael Blanton (Amy Grant, Michael W. Smith, Reunion Records), to select the ten outstanding finalists who were awarded thousands of dollars in cash and prizes, including a check for $1,500 in addition to the Gibson Les Paul guitar for the grand prize winner.

Given the extraordinary circumstances of 2020, the contest offered a unique platform for songwriters to express their creativity, inspire others through their art and do it all for a good cause.

“We were so honored to partner with Scott Hamilton and his foundation for this contest,” says Michael Blanton, one of Songwriting University's founders. “To be able to provide some levity and light at the end of such a dark year was an honor and a testament to the healing power of song.”

The remaining finalists are listed below. The third, fourth, and fifth place winners will receive a two-hour songwriting session with a hit songwriter ($499 value), and the sixth through tenth place finalists will receive a one-year subscription to SU/MasterClass ($90 value).

Per the terms of the contest, winners were chosen in an anonymous, blind judging process, with the names, bios, and addresses of the songwriters hidden from the judges.

Winning songs were selected for originality, melody, lyrics and composition/structure. Performance and recording quality were not considered.

With over 3,000 major cuts in Country, Pop, Christian, and Foreign music, contributions to over 50 GRAMMY-nominated and winning songs, and over 100 No. 1 songs, the Songwriting University staff includes the likes of Randy Thomas (“Butterfly Kisses”), Brian White (“Watching You”), Steve Siler (“I Will Follow Christ”), Bill Shore (“Wild Horses”), Bobby E. Boyd (“Bless the Broken Road”), Wayne Tester (“The Change”), Dennis Kurtilla (“He Will Carry Me”), and Ed Nicholson (“The Stone Was Rolled Away”), among other lauded songwriters. In addition to songwriting sessions, Songwriting University offers Master Classes with featured songwriters including Gordon Kennedy (“Change the World”) and Mike Reid ("I Can't Make You Love Me"), as well as Online Videos and Lessons, Podcasts, Interviews, and more.

Hamilton, who brought home the gold medal for figure skating from the 1984 Winter Olympics, dreams of a day where there is no more suffering because of cancer.

At 38, Hamilton's life took a tragic turn when he was diagnosed with testicular cancer, followed by three brain tumors. Since recovering his health, Scott set out to inspire others with his inescapable optimism, and created the Scott Hamilton CARES Foundation in order to “help those who are down get back up again.” From figure skating to life, Scott knew that a fall couldn’t keep him down.

“I see a day where everyone survives cancer and no one suffers their way through treatments and cancer does no harm,” says Hamilton.

CARES stands for Cancer Alliance for Research Education and Survivorship. The Foundation seeks to be a neutral convener between organizations, researchers, academic scientists, drug developers and others to accelerate the advancement of less toxic treatments for isolated cancers and tumors. Breakthroughs in our understanding of cancer are driving new options with less devastating side effects from highly toxic cancer treatments.

About Gibson Gives:
For over 127 years, Gibson, the iconic American guitar brand, has been shaping sound across generations and genres through their guitars. Gibson and its charitable arm, Gibson Gives, believe in the power of music, and that getting instruments into the hands of those with a desire to make music is a truly life-changing event.

Gibson Gives—a 501(c)(3) committed to introduce, inspire, and amplify the power of music through guitars—believes that now more than ever we must band together to support programs for music students.

Gibson Gives is committed to making the world a better place through music by creating, developing, supporting programs, and working with other non-profit organizations in their efforts to advance youth-focused and healing music initiatives. 100% of all donations to and from Gibson Gives go towards giving the gift of music.

Since inception, Gibson Gives has provided thousands of guitars and related value-in-kind of more than $30 million. In mid-2019, Gibson Gives committed to donating 1,000 guitars over the next 1,000 days and exceeded that goal, having donated over 2,000 guitars in a year’s time. Gibson Gives believes investing in music education will yield better people, better leaders, and a better world. Gibson Gives is changing lives…one guitar at a time. For more information, visit gibsongives.org.

Gibson Gives—the charitable arm of Gibson guitars—is committed to making the world a better place through the gift of music. (Logo courtesy of Gibson Gives)