Recent release “Leaving Toyland” from Page Publishing author Sonne Jon Sioch is a fifties-era tale depicting the seduction and sexual education of a young boy in his journey to manhood. 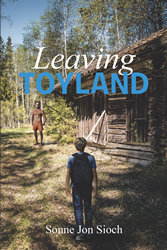 Danny’s story began on a hot August day in the summer of 1959 when his youthful curiosity caused him to set out to follow a river. This innocent exploring adventure gave him an unexpected discovery, an old cabin secluded deep in the forest. It was at this cabin that he met Ben and had his first taste of sweet white port and eventually discovering the awesome, exciting pleasure of “man play.” Ben and his lifelong friend Tony enlisted as soldiers in the Korean War. When Tony was killed at the war’s end in 1953, Ben’s life was shattered. There was no family to return to so, he traveled around the country for six years, looking for something or someone, hoping to find himself and bring purpose to his life. His journey brought him back to the cabin where he and Tony had spent their youth. It was here that Ben and Danny met; it was there that life would change for the both of them. But as Danny was to discover, there was a price to pay as the innocence of youth slipped away. There were consequences that came with this new, sexually charged coming-of-age world. Danny found the Toyland of youth’s innocence does have its borders, and once crossed, there is no going back, not ever!