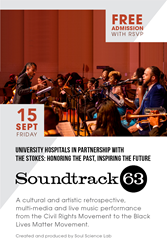 Consistent with University Hospitals' core values of excellence, diversity, integrity, compassion and teamwork, Soundtrack '63 is a fitting historical tribute to the timeless legacy of Mayor Stokes and Congressman Stokes.

University Hospitals in partnership with the “Stokes: Honoring the Past, Inspiring the Future” Initiative to present Soul Science Lab’s “Soundtrack ‘63”, a live, multimedia musical performance and artistic retrospective of the African-American experience in America on Friday, September 15th at the Cuyahoga Community College Metropolitan Campus Auditorium at 7:30pm.

As part of the 50th anniversary celebration of Mayor Stokes and Congressman Stokes, this commemorative and historic edition of “Soundtrack ‘63” will feature performances by Cleveland native, poet and community leader, Basheer Jones, and will highlight the Stokes brothers lasting contributions to the city of Cleveland and beyond. The production connects generations through an immersive video of pivotal highlights prior to, during and post- Civil Rights Movement along with spirituals, protest songs, hip-hop, jazz, funk, soul and popular 20th century music performed by an 18-piece orchestra and a soul stirring vocal ensemble.

From the Black empowerment songs of James Brown to the outcries for justice in Ferguson, “Soundtrack '63” illuminates attention around one of the single most important movements in history, with messages that remain relevant today. It features music that mobilizes change and will inspire leaders for generations to come. “Soundtrack ‘63” soulfully explores the culture of the times in this compelling story of tragedy, triumph and transcendence. It celebrates the sights and sounds that defined an era. With commentary from some of the movement’s renown voices, including Dr. Cornel West and Sonia Sanchez, Soul Science Lab duo Chen Lo (Creative Director) and Asante Amin (Musical Director), take the audience on a journey through milestone events in African-American history, highlighting the year 1963.

Originally commissioned by 651 ARTS and created by Creative Director Chen Lo, “Soundtrack ’63” first premiered in 2013 as a millennial response to the major events of the Civil Rights Movement and significant moments in history that have defined much of contemporary America. The production has since then run sold out engagements at The New School’s Tischman Auditorium in New York City and the Contemporary Arts Center in New Orleans, LA in addition to a demo presentation at the Brooklyn Museum and at Lincoln Center Education.

For all Soul Science Lab media and booking inquiries, please contact Jasu Sims at jasu(at)presstheory(dot)com or by phone at (646) 820.9859.

ABOUT UNIVERSITY HOSPITALS
Founded in 1866, University Hospitals serves the needs of patients through an integrated network of 18 hospitals, more than 40 outpatient health centers and 200 physician offices in 15 counties throughout northern Ohio. The system’s flagship academic medical center, University Hospitals Cleveland Medical Center, located on a 35-acre campus in Cleveland’s University Circle, is affiliated with Case Western Reserve University School of Medicine. The main campus also includes University Hospitals Rainbow Babies & Children's Hospital, ranked among the top children’s hospitals in the nation; University Hospitals MacDonald Women's Hospital, Ohio's only hospital for women; and University Hospitals Seidman Cancer Center, part of the NCI-designated Case Comprehensive Cancer Center. UH is home to some of the most prestigious clinical and research programs in the nation, including cancer, pediatrics, women's health, orthopedics, radiology, neuroscience, cardiology and cardiovascular surgery, digestive health, transplantation and urology. UH Cleveland Medical Center is perennially among the highest performers in national ranking surveys, including “America’s Best Hospitals” from U.S. News & World Report. UH is also home to Harrington Discovery Institute at University Hospitals – part of The Harrington Project for Discovery & Development. UH is one of the largest employers in Northeast Ohio with 27,000 employees. For more information, go to UHhospitals.org.

ABOUT THE STOKES INITIATIVE
University Hospitals is proud to be a partner in the yearlong, community-wide commemoration of the 50th anniversary of Carl Stokes’ election as mayor of Cleveland. Mayor Stokes and his brother, Congressman Louis Stokes, played key roles in the advancement of the city and the nation through the civil rights movement and beyond. More than 60 organizations and numerous individuals are affiliated with the Stokes initiative in different capacities, including conveners, honorary chairs, chairs, community partners and sponsors. For more information, visit stokes50cle.com.