Soup Will Not Cure Colds; Jobs Do Not Cause Carpal Tunnel 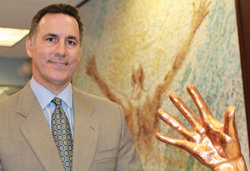 August 2020 - A common nerve compression disorder causing pain, tingling and numbness in the wrist, hand and fingers is an occupational disease, right? “Wrong,” says Alejandro Badia MD, noted hand and upper limb specialist and author of the new book Healthcare from the Trenches. He brands claims that carpal tunnel syndrome develops because of overuse of the wrist a “myth, much like saying cracking your knuckles lead to arthritis or eating chicken soup will cure the common cold.”

Carpal tunnel syndrome, or CTS, is more likely due to hormonal changes, underlying inflammatory diseases, simple wrist anatomy – even genetics, says Dr. Badia, whose statement conflicts with that of some professionals who still believe a link exists between the disorder and computer-keyboard typing, painting, piano playing, and other activities involving excessive wrist movements.

The syndrome occurs when the median nerve, extending from the forearm to the hand through the narrow tunnel of bone and ligaments on the wrist’s palm side, becomes pinched and inflamed from irritated tendons or other conditions that cause swelling and thickening of the connective tissue surrounding the nerve in the wrist canal. Symptoms, which begin gradually and worsen over time, include wrist or forearm pain; persistent burning, tingling or numbness in the fingers; and decreased hand and wrist strength, explains Dr. Badia, founder and chief medical officer of the Badia Hand to Shoulder Center and OrthoNOW®.

“CTS is an extremely common, readily diagnosable medical condition. However, it is often misunderstood, even by the scientific community,” Dr. Badia says. Recent studies bear him out.

For example, the latest research, published in a July 2020 issue of Nature Communications, indicates that genetics may play a much greater role in CTS than once thought. In analyzing nearly 100 cases of CTS in two families, scientists report finding mutations of a gene “highly expressed” in the tissue around the median nerve. The mutated gene is believed responsible for promoting an accumulation of cells that cause the connective tissue to thicken and press on the nerve. Study results could eventually lead to new treatments and preventive measures.

But genetics is only one culprit in a disorder considered multifactorial. The National Institutes of Health reports women are three times more likely than men to experience carpal tunnel syndrome. The higher risk among females is likely due to their anatomically narrower wrist channels and the disorder’s suspected relationship to metabolic and hormonal-level changes during pregnancy and menopause, Dr. Badia says.

“Hormones are chemical substances that impact every organ and structure in the body. Variations in the levels of these substances – such as what occurs in menopause and pregnancy -- can lead to fluid retention and thicken the extracellular matrix in the wrist, resulting in pressure on the median nerve,” Dr. Badia says.

Other conditions increasing risk among both sexes, researchers say, are injuries to the wrist, obesity, inflammatory and nerve-related diseases like arthritis and diabetes, and a dysfunctional thyroid. The thyroid controls metabolism – how the body utilizes energy from food.

“Repetitive wrist activities -- like typing on a computer keyboard or handling a cash register -- may further aggravate CTS symptoms but are not linked to actual development of the disorder. Clinical research has failed to demonstrate conclusively any defined relationship between CTS and constant use of the wrist,” Dr. Badia indicates. “The ‘myth’ that workplace responsibilities somehow cause CTS has resulted in the misdirection of billions of dollars into workers’ compensation to treat a condition that commonly occurs in the general population.”

Also debunked by Dr. Badia are false beliefs that the only recourse for CTS is surgery, and, when performed, frequently proves unsuccessful.

In fact, initial, recommended therapies tend to be conservative. Depending on the severity of the condition, treatments can involve wrist splints at night, anti-inflammatory medications, injection of corticosteroids and physical therapy. Only if the problem persists, the nerve compression proves severe enough, or a physician determines the syndrome is causing deterioration of hand muscles will surgery be recommended, Dr. Badia says.

“The current, most advanced surgical approach is endoscopic release, which can be performed in as little as 10 minutes in an outpatient setting under local anesthesia. It involves dividing the ligament at the roof of the carpal tunnel in order to increase space in the canal and take pressure off the nerve,” Dr. Badia says. “Postoperative complications are minimal and long-term results excellent.” Dr. Badia adds that recovery from this simple procedure is so easy that a cardiothoracic surgeon had Dr. Badia perform the release on the morning he was attending a conference near Miami. Three days later, this same cardiothoracic surgeon flew to the South West city where he practices and performed a major thoracic surgery using the dominant affected hand. Numbness was gone. Dr. Badia’s own international patient coordinator had the procedure also and went back to her computer within 90 minutes to rattle off some critical email responses to patients before Dr Badia urged her to go home and relax.

Carpal tunnel syndrome cannot always be prevented, but risks – and symptoms -- may be reduced. Dr. Badia offers these tips to protect hands and wrists:

“Most importantly, patients who are experiencing the classic symptoms of CTS should contact an orthopedic specialist as quickly as possible. If left untreated, the syndrome can eventually make it difficult to form a fist, coordinate fingers and do simple, manual tasks like buttoning a shirt or blouse. The disorder may even lead to a wasting of muscle at the base of the thumb and permanent nerve damage,” Dr. Badia advises.