As part of a joint effort among 30-plus organizations across the country, the Society of Professional Benefit Administrators (SPBA) shared feedback with the United States Congress to encourage further legislation that will address surprise balance billing in health care. 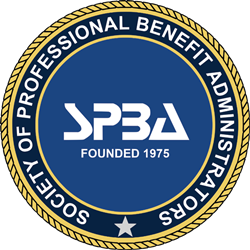 We are actively working toward legislation that will protect consumers when they lack a choice in providers, but at the same time, won’t increase costs for all consumers.

Following a recent hearing that covered the issue of surprise billing in health care, the Society of Professional Benefit Administrators (SPBA) was part of a collaborative effort in which 30-plus organizations urged the United States Congress to pass additional legislation as a protection to patients.

The group shared a letter with Congressman Tim Walberg (R - MI) and Congresswoman Frederica S. Wilson (D - FL) from the Subcommittee on Health, Employment, Labor and Pensions. It outlined the organizations’ collective input on surprise medical bills as well as disclosure and transparency, required reimbursement and ambulance and outsourced emergency departments.

“As an advocate for our third party administrator members and their plan participants, SPBA understands the real-world burden and effects of surprise billing,” said Anne Lennan, president of SPBA. “We are actively working toward legislation that will protect consumers when they lack a choice in providers, but at the same time, won’t increase costs for all consumers.”

A sampling of the provisions outlined within the letter to Congress include:

“A patient who requires unexpected medical care shouldn’t have to worry about the added stress and expense of receiving a surprise balance bill later,” said Kevin Schlotman, SPBA’s chairman of the board. “SPBA – with help from its Members and Board of Directors – will keep working to influence and improve legislation promoting transparency in health care.”

Among the organizations involved in sharing feedback with Congress are the American Benefits Council, Corporate Health Care Coalition, National Retail Foundation and Small Business & Entrepreneurship Council. For a full list of the 34 participants, read the letter here.

SPBA is the national association of Third Party Administration (TPA) firms that manage client employee benefit plans. It is estimated that over 75% of U.S. workers and their dependents in non-federal health coverage are in plans administered by TPAs. The clients of TPA firms include every size and format of employment, including large and small employers, state/county/city plans, union, non-union, collectively bargained multiemployer plans, as well as most industries and professions.