In the 1960s, Nevada gambling kingpin William F. Harrah built a mansion on Lake Tahoe with a secret celebrity tunnel and a salt cave. Harrah's former home is featured this week at TopTenRealEstateDeals.com. 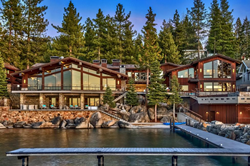 William F. Harrah's former mansion on Lake Tahoe with a secret celebrity tunnel is for sale at $25.75 million.

An early Nevada gambling innovator and character, William F. Harrah, owned one of the world's largest car museums, was married seven times including a brief marriage to singer Bobbie Gentry ('Ode to Billie Joe'), and helped create the Nevada State Gaming Control Board. At the height of the Depression, Harrah parlayed a $500 investment when he bought his father's interests in a small-time California gaming sideshow into one of the state's largest casino and hotel enterprises. Following the success of his Lake Tahoe casino/hotel, in 1963 Harrah broke ground for his Lake Tahoe mansion, Villa Harrah, in Zephyr Cove, Nevada. It is now for sale at $25.75 million.

Since he was one of the first to build on Lake Tahoe, Harrah was able to pick a prime waterside location. Already a master of the hospitality industry, his 20,000-square-foot home was to be the epitome of luxury. In anticipation of his future celebrity guests, Harrah knew that they needed to escape the spotlight occasionally and have the freedom to kick up their heels without fear of wiley photographers hiding in the bushes or the teenager from next door appearing unexpectedly begging an autograph. To combat these possibilities, Harrah built a secret tunnel that ran the length of the property so that guests like Frank Sinatra, Sammy Davis and Judy Garland could quietly enter. Just like his casino, Harrah thought of everything down to the last detail. The tunnel has since been sealed, closing that glamorous link to the past.

From every expertly placed Brazilian stone to each room positioned to capture a perfect lake view, every space and each material used was meticulously thought out by Harrah. Owners who followed continued the theme when recently adding $14 million in renovations. Designed to impress in Nevada style from its soaring architecture, location and plethora of amenities, its large entertaining spaces are perfect for hosting large events both inside and out or inviting family and friends for a long weekend of water sports. The three-level home has eight ensuite bedrooms and thirteen baths with one bedroom a bunk room sleeping twelve. Both the large kitchen and laundry center are equipped with multiple appliances making it easy to care for a large party of guests. When many homes today might have one Himalayan salt lamp, this home takes it to the max with its own salt cave lined in the healthful mineral. The cave can be found in the full spa with a steam room, sauna, jetted bath, cold plunge and hair-nail salon. Other creature comforts include a large home theater, billiards, wet bar, sweeping terraces and pool overlooking the lake along with a private beach and pier.

Zephyr Cove is a few miles from Stateline, Nevada where there are endless entertainment, shopping, dining and gambling choices. New on the market, Harrah’s villa is priced at $25.75 million and listed by David Bellings and Jamison Blair of Compass Realty, San Francisco.